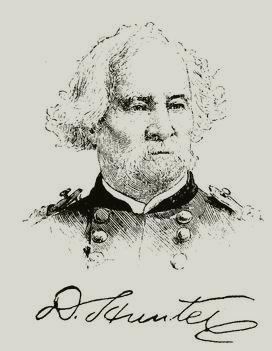 HUNTER, Andrew, clergyman, born in Virginia in 1752; died in Washington, D. C., 24 February, 1823. He was the son of a British officer, was licensed to preach by the first presbytery of Philadelphia in 1773, and immediately afterward made a missionary tour through Virginia and Pennsylvania. He was appointed a brigade chaplain in 1775, and served throughout the Revolution, receiving the public thanks of General Washington for valuable aid at the battle of Monmouth. In 1794 he was principal of a school near Trenton, New Jersey In 1804 he was elected professor of mathematics and astronomy in Princeton, but resigned in 1808, to take charge of the Bordentown academy, and in 1810 became a chaplain in the navy. He married a daughter of Richard Stockton, the signer.--His son, David, soldier, born in Washington, D. C., 21 July, 1802; died there, 2 February, 1886. He was graduated at the United States military academy in 1822, appointed 2d lieutenant in the 5th infantry, promoted 1st lieutenant in 1828, and became a captain in the 1st dragoons in 1833. He was assigned to frontier duty, and twice crossed the plains to the Rocky mountains. He resigned his commission in 1836, and engaged in business in Chicago. He re-entered the military service as a paymaster, with the rank of major, in March. 1842, was chief paymaster of General John E. Wool's command in the Mexican war, and was afterward stationed successively at New Orleans, Washington, Detroit, St. Louis, and on the frontier. He accompanied President-elect Lincoln when he set out from Springfield for Washington in February, 1861, but at Buffalo was disabled by the pressure of the crowd, his collar bone being dislocated. On 14 May he was appointed colonel of the 6th United States cavalry, and three days later was commissioned brigadier-general of volunteers. He commanded the main column of McDowell's army in the Manassas campaign, and was severely wounded at Bull Run, 21 July, 1861. He was made a major-general of volunteers, 13 August, 1861, served under General Fremont in Missouri, and on 2 November succeeded him in the command of the western department. From 20 November, 1861, till 11 March, 1862, he commanded the Department of Kansas. Under date of 19 February, 1862, General Halleck wrote to him" "To you, more than any other man out of this department, are we indebted for our success at Fort Donelson. In my strait for troops to reenforce General Grant, I applied to you. You responded nobly, placing your forces at my disposition. This enabled us to win the victory." In March, 1862, General Hunter was transferred to the Department of the South, with headquarters at Port Royal, South Carolina On 12 April he issued a general order in which he said: "All persons of color lately held to involuntary service by enemies of the United States, in Fort Pulaski and on Cockspur island, Georgia, are hereby confiscated and declared free in conformity with law, and shall hereafter receive the fruits of their own labor." On 9 May, in general orders declaring Georgia, Florida, and South Carolina (his department) under martial law, he added, "Slavery and martial law, in a free country, are altogether incompatible. The persons in these three states, heretofore held as slaves, are therefore declared forever free." Ten days later this order was annulled by the president. (See LINCOLN, ABRAHAM.) In May General Hunter organized an expedition against Charleston, in which over 3,000 men were landed on James island, but it was unsuccessful. Later he raised and organized the 1st South Carolina volunteers, the first regiment of black troops in the National service. There upon a Kentucky representative introduced into congress a resolution calling for information on the subject. This being referred to General Hunter by the secretary of war, the general answered: "No regiment of fugitive slaves has been or is being organized in this department. There is, however, a fine regiment of persons whose late masters are fugitive rebels--men who everywhere fly before the appearance of the National flag, leaving their servants behind them to shift, as best they can, for themselves." In August Jefferson Davis issued a proclamation to the effect that, if General Hunter or any other United States officer who had been drilling and instructing slaves as soldiers should be captured, he should not be treated as a prisoner of war, but held in close confinement for execution as a felon. In September General Hunter was ordered to Washington and made president of a court of inquiry, to investigate the causes of the surrender of Harper's Ferry, and other matters. In May, 1864. he was placed in command of the Department of West Virginia. He defeated a Confederate force at Piedmont on 5 June, and attacked Lynchburg unsuccessfully on the 18th. From 8 August, 1864, till 1 February, 1865, he was on leave of absence, after which he served on courts-martial, being president of the commission that tried the persons who conspired for the assassination of President Lincoln. He was brevetted major-general United States army, 13 March, 1865, and mustered out of the volunteer service in January, 1866, after which he was president of a special claims commission and of a board for the examination of cavalry officers. He was retired from active service, by reason of his age, 31 July, 1866, and thereafter resided in Washington. General Hunter married a daughter of John Kinzie, who was the first permanent citizen of Chicago. Mrs. Hunter survived her husband.--Another son, Lewis Boudinot, surgeon, born in Princeton, New Jersey, 9 October, 1804; died in Philadelphia, Pennsylvania, 24 June, 1887, was graduated at Princeton in 1824, and at the medical department of the University of Pennsylvania in 1828. He then entered the United States navy as a surgeon, and was on the "Princeton" when the secretary of state and the secretary of the navy were killed by the bursting of a gun in 1843. He served during the Mexican war on the "Saratoga," and during the civil war as fleet-surgeon of the North Atlantic squadron under Admiral Porter. On 3 March, 1871, he was made medical director, with the rank of commodore, and retired.

Start your search on Andrew Hunter.