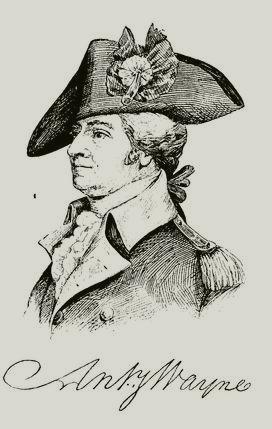 Indian tribes of the north west, instigated by the British, refused to cease hostilities after the peace of 1783, and previous attempts by Gem Josiah Harmer and General Arthur St. Clair at subjugating the savages had failed. Wayne collected an adequate force, and, conscious that failure in negotiating with the Indians would be followed by immediate hostilities on the frontiers, spent more than a year in drilling his troops and training them for the peculiar service for which they were required. In the autumn of 1793 he marched into the northwest, and near Greenville, Ohio, built a stockade which he called Fort Recovery. He pushed on during the following summer through the wilderness toward Maumee river, and at its junction with the Auglaize he built Fort Adams, as an intermediate post. In August he went down the Maumee with 1,000 men, and encamped near a British post at the foot of the Maumee rapids, called Fort Miami. Here General Wayne, with a force ample to destroy the Indians in spite of British influence, offered them peace if they would lay down their weapons. On their refusal he advanced to the head of the rapids, and on 20 August, at Fallen Timbers, attacked and defeated the Indians. Almost all the dead warriors were found with British arms. After laying their country waste he moved up to the junction of St. Mary's and St. Joseph's rivers, where he built a strong fortification which he called Fort Wayne. He spent the winter in Greenville, where, on 3 August, 1795, was signed a treaty with the Indians, in which twelve tribes participated. A lasting peace followed, and a large territory was acquired by the United States. Wayne returned on a visit to Pennsylvania, and was appointed sole commissioner to treat with the Indians of the northwest, and to take possession of all the forts that had been held by the British in that territory; but. while descending Lake Erie from Detroit, he died from an attack of the gout. AI-though Washington called him "prudent," Wayne's unexpected successes in perilous expeditions won for him his more popular appellation of " Mad Anthony Wayne." The title of "Dandy Wayne" was also applied to him, owing to his constant attention to dress, and in one of his letters to Washington he expressed himself in favor of an elegant uniform and soldierly appearance in preference to poorly clad troops with a greater amount of ammunition, he was called "Black Snake" by the Indians, perhaps because that reptile will attack any other species and rarely gets the worst of an encounter. After he defeated them in 1794 he was given the name of "Wind" or " Tornado," because "he was exactly like a hurricane, that drives and tears and prostrates everything before it." His body was removed from Presque Isle in 1809 by his son, and buried in Radnor churchyard in his native county, where the Pennsylvania Society of the Cincinnati caused a marble monument to be erected, which was dedicated with appropriate ceremonies on 4 July of that year. His portrait was painted by Charles Wilson Peale and by John Trumbull, from whose picture our vignette is copied. Wayne's residence at Easttown, Chester County, Pennsylvania, is represented in the accompanying illustration. See "Life of Anthony Wayne," by John Armstrong, in Sparks's "American Biography," and "Orderly Book of the Northern Army at Fort Ticonderoga and Mount Independence" (Albany, 1859).--His son, Isaac, born in Warren county, Pennsylvania, in 1770; died in Chester county, Pennsylvania, 25 October, 1852, received a public-school education, was graduated at Dickinson college, and acquired the title of colonel by his military experiences. He studied law, and was admitted to the Philadelphia bar in 1795. In 1814 he was the Federal candidate for governor of Pennsylvania, but was defeated. He was elected to congress from Pennsylvania as a Federalist, and served from 1 December, 1823, to 3 March, 1825.--His great-nephew, William, born 6 December, 1828, is the grandson of General Wayne's daughter, and took the name of Wayne, being the representative of the family and the owner of Waynesborough. He was graduated at the University of Pennsylvania in 1846, and during the civil war held the rank of captain in the 97th Pennsylvania volunteers. From 1881 till 1887 he served as a member of the Pennsylvania assembly.

Start your search on Anthony Wayne.