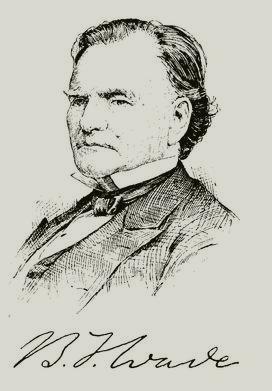 WADE, Benjamin Franklin, senator, born in Feeding Hills near Springfield, Massachusetts, 27 October, 1800; died in Jefferson, Ohio, 2 March, 1878. His ancestor, Jonathan, came from Norfolk, England, to Massachusetts in 1632. His father, James, a soldier of the Revolution, removed to Andover, Ohio, in 1821. The son's education was received chiefly from his mother. He shared in the pioneer work of his new home, and in 1823, after aiding in driving a herd of cattle to Philadelphia, went to Albany, New York, where he spent two years in teaching, also beginning the study of medicine with his brother, and at one time working as a common laborer on the Erie canal to obtain funds. On his return to Ohio he began the study of law, was admitted to the bar in 1827, and began practice in Jefferson. He formed a partnership with Joshua R. Giddings in 1831, and in 1835 was elected prosecuting attorney of Ashtabula county, which office he held till 1837. In that year he was chosen as a Whig to the state senate, where, as a member of the judiciary committee, he presented a report that put an end to the granting of divorces by the legislature. In 1839 he was active in opposition to the passage of a more stringent fugitive-slave law, which commissioners from Kentucky were urging on the legislature. The law passed, but his forcible speech against it did much to arouse state pride; on the subject and to make it a dead letter. His action cost him his re-election to the senate, but he was chosen again in 1841. In February, 1847, he was elected by the legislature president-judge of the 3d judicial district, and while on the bench he was chosen, on 15 March, 1851, to the United States senate, where he remained till 1869. He soon became known as a leader of the small anti-slavery minority, advocated the homestead bill and the repeal of the fugitive-slave law, and opposed the Kansas-Nebraska bill of 1854, the admission of Kansas under the Lecompton constitution of 1858, and the purchase of Cuba. After the assault on Charles Sumner, Robert Toombs avowed in the senate that he had witnessed the attack, and approved it, whereupon Mr. Wade, in a speech of great vehemence, threw down the gage of personal combat to the southern senators. It was expected that there would be an immediate challenge from Toombs, but the latter soon made peace. Subsequently Mr. Wade, Zachariah Chandler, and Simon Cameron made a compact to resent any insult from a southerner by a challenge to fight. This agreement was made public many years afterward. Wade was present at the battle of Bull Run with other congressmen in a carriage, and it is related that after the defeat seven of them alighted, at Wade's proposal, being armed with revolvers, and for a quarter of an hour kept back the stream of fugitives near Fairfax Court-House. This incident, as narrated in the journals, made a sensation at the time. Mr. Wade labored earnestly for a vigorous prosecution of the war, was the chairman and foremost spirit of the joint committee on the conduct of the war in 1861-'2, and was active in urging the passage of a confiscation bill. As chairman of the committee on territories, he reported a bill in 1862 to abolish slavery in all the territories. He was instrumental in the advancement to the portfolio of war of Edwin M. Stanton, whom he recommended strongly to President Lincoln. Though he cordially supported the administration, he did not hesitate to criticise many of its acts, and after the adjournment of the 38th congress he issued, with Henry Winter Davis, what became known as the Wade-Davis manifesto, condemning the president's proposed reconstruction policy. Mr. Wade became president pro tempore of the senate, and thus acting vice-president of the United States, on 2 March, 1867, succeeding Lafayette S. Foster. He advised President Johnson to put on trial for treason a few of the Confederate leaders and pardon the rest, and was radical in his ideas of reconstruction. In the impeachment of President Johnson he voted for conviction. In 1869, at the close of his second term, he was succeeded in the senate by Allen G. Thurman, and he then returned to his home in Jefferson, Ohio. He was one of the chief members of the Santo Domingo commission in 1871, and then became attorney for the Northern Pacific railroad. He was chairman of the Ohio delegation in the Cincinnati national convention of 1876, and earnestly advocated the nomination of Rutherford B. Hayes, but after his accession to the presidency Mr. Wade bitterly condemned his course in relation to the southern states. Though Mr. Wade had been called" Frank Wade" in Ohio, from his middle name, he was known in congress and throughout the country as Ben or "Old Ben" Wade. He was popularly looked upon as one of the bulwarks of the National cause in the darkest hours of the civil war, and was widely admired and respected for his fearlessness, independence, and honesty. His rugged and forcible style of oratory always commanded attention. See his " Life," by Albert O. Riddle (Cleveland, Ohio, 1888).--His son, JAMES FRANKLIN, entered the army on 14 May, 1861, as 1st lieutenant of the 6th United States cavalry, and rose in rank till at the close of the war he was major and brevet brigadier-general of volunteers. He became lieutenant-colonel on 20 March, 1879, and colonel of the 5th cavalry on 21 April, 1887.