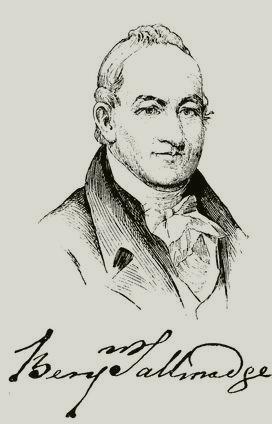 TALLMADGE, Benjamin, soldier, born in Brook-haven, New York, 25 February, 1754 ; died in Litchfield, Connecticut, 7 March, 1835. His father, Benjamin, was a clergyman. After graduation at Yale in 1773 the son had charge of a high-school in Wethersfield until 20 June, 1776, when he was appointed lieutenant and adjutant in a Connecticut regiment and served throughout the Revolutionary war. On 15 December, 1776, he was appointed by General Washington captain in the 2d light dragoons, and he was promoted major on 7 separate detachment for special services was committed to him several times during the war, and he then received his orders directly from the commander-in-chief.

He participated in the battles of Short Hills and Brandywine, and at Germantown his detachment was at the head of General John Sullivan's division. By order of General Washington, Major Tallmadge repeatedly threw his dragoons across the principal thoroughfare to check the retreat of the infantry. He was stationed with his troops at Valley Forge in 1777, reconnoitred the country between Schuylkill and Delaware rivers, and served at Monmouth. On 5 September, 1779, he became colonel, and performed a brilliant exploit in crossing Long Island sound to Lloyd's Neck, L. I., where he surprised and captured 500 Tory marauders without the loss of a man.

In 1780 he planned and conducted the expedition that resulted in the taking of Fort George at Oyster Bay, L. I., and the destruction of the British stores on the island, for which service he received the thanks of congress. He was for some time a member of Washington's military family and carried on with him an important confidential correspondence in 1778-'83. Colonel Tallmadge had the custody of Major John Andre until his execution, and walked with him to the scaffold, where they bade an affectionate farewell. Years afterward Tallmadge wrote:

"I became so deeply attached to Major Andre that I can remember no instance where my affections were so fully absorbed in any man. When I saw him swinging under the glibber it seemed for a time as if I could not support it."

After the war he returned to Litchfield, where he engaged successfully in mercantile pursuits. He was elected to congress as a Federalist and served from 7 December, 1801, till 3 March, 1817. Colonel Tallmadge was made the first treasurer and subsequently president of the Connecticut Society of the Cincinnati, and was much esteemed for his social qualities and numerous gifts to public and private charities. In 1782 he bought the property in Litchfield that is still known as the Tallmadge Place, and is now the summer residence of his granddaughter, Mrs. William Curtis Noyes. Yale gave him the degree of M. A. in 1778. He prepared his " Memoirs at the Request of his Children," which were printed privately by his son, Frederick Augustus Tallmadge (New York, 1859). Colonel Tallmadge married the daughter of General William Floyd, a signer of the Declaration of Independence.

His son, Frederick Augustus, lawyer, born in Litchfield, Connecticut, 29 August, 1792; died there, 17 September, 1869, was graduated at Yale in 1811, studied law at the Litchfield law-school, was admitted to the bar and began practice in New York. During the closing months of the war with Great Britain he commanded a troop of volunteer cavalry on Long Island. He was made an alderman of New York in 1834, a common councilman in 1836, and was a state senator from 1837 till 1840, serving as president of that body and at the same time as ex-officio judge of the supreme court of errors. In 1841-'6 he was recorded of New York, and he held this office again from 1848 till 1851. He was elected to congress as a Whig and served from 6 December, 1847, till 3 March, 1849. From 1857 till 1862 he was general superintendent of the Metropolitan board of police, and in 1862-'5 he was clerk of the court of appeals. Afterward he practiced law in New York city. He became best known for the energy that he displayed while he was recorder in suppressing the Astor place riot of May, 1849.

Start your search on Benjamin Tallmadge.