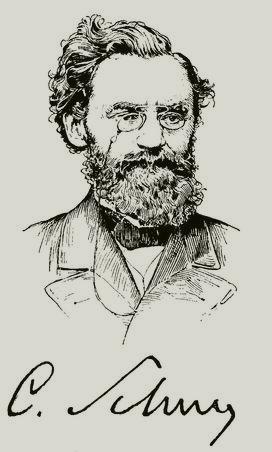 SCHURZ, Carl, statesman, born in Liblar, near Cologne, Prussia, 2 March, 1829. After studying at the gymnasium of Cologne, he entered the University of Bonn in 1846. At the beginning of the revolution of 1848 he joined Gottfried Kinkel, professor of rhetoric in the university, in the publication of a liberal newspaper, of which he was at one time the sole conductor. In the spring of 1849, in consequence of an attempt to promote an insurrection at Bonn, he fled with Kinkel to the Palatinate, entered the revolutionary army as adjutant, and took part in the defence of Rastadt. On the surrender of that fortress he escaped to Switzerland. In 1850 he returned secretly to Germany, and effected the escape of Kinkel from the fortress of Spandau. In the spring of 1851 he was in Paris, acting as correspondent for German journals, and he afterward spent a year in teaching in London. He came to the United States in 1852, resided three years in Philadelphia, and then settled in Watertown, Wisconsin In the presidential canvass of 1856 he delivered speeches in German in behalf of the Republican party, and in the following year he was an unsuccessful candidate for lieutenant-governor of Wisconsin. During the contest between Stephen A. Douglas and Abraham Lincoln for the office of United States senator from Illinois in 1858 he delivered his first speech in the English language, which was widely published. Soon afterward he removed to Milwaukee and began the practice of law. In 1859-'60 he made a lecture-tour in New England, and aroused attention by a speech in Springfield, Massachusetts, against the ideas and policy of Mr. Douglas. He was a member of the Republican national convention of 1860, and spoke both in English and German during the canvass. President Lincoln appointed him minister to Spain, but he resigned in December, 1861, in order to enter the army. In April, 1862, he was commissioned brigadier-general of volunteers, and on 17 June he took command of a division in the corps of General Franz Sigel, with which he participated in the second battle of Bull Run. He was made major-general of volunteers, 14 March, 1863, and at the battle of Chancellorsville commanded a division of General Oliver O. Howard's corps. He had temporary command of this corps at Gettysburg, and subsequently took part in the battle of Chattanooga. During the summer of 1865 he visited the southern states, as special commissioner, appointed by President Johnson, for the purpose of examining their condition. In the winter of 1865-'6 he was the Washington correspondent of the New York "Tribune," and in the summer of 1866 he removed to Detroit, where he founded the "Post." In 1867 he became editor of the " Westliche Post," a German newspaper published in St. Louis. He was temporary chairman of the Republican national convention in Chicago in 1868, where he moved an amendment to the platform, which was adopted, recommending a general amnesty. In January, 1869, he was chosen United States senator from Missouri, for the term ending in 1875. He opposed some of the chief measures of President Grant's administration, and in 1872 took an active part in the organization of the Liberal party, presiding over the convention in Cincinnati that nominated Horace Greeley for the presidency. After the election of 1872 he took an active part in the debates of the senate in favor of the restoration of specie payments and against the continuation of military interference in the south. He advocated the election of Rutherford B. Hayes in the presidential canvass of 1876, and in 1877 President Hayes appointed him secretary of the interior. He introduced competitive examinations for appointments in the interior department, effected various reforms in the Indian service, and adopted systematic measures for the protection of the forests on the public lands. After the expiration of the term of President Haves he became editor of the " Evening Post" in New York city, giving up that place in January, 1884. In the presidential canvass of that year he was one of the leaders of the "Independent" movement, advocating the election of Grover Cleveland. He remained an active member of the civil service reform league. Among his more celebrated speeches are "The Irrepressible Conflict" (1858): "The Doom of Slavery" (1860); "The Abolition of Slavery as a War Measure" (1862); and " Eulogy on Charles Sumner" (1874). Of his speeches in the senate, those on the reconstruction measures, against the annexation of Santo Domingo, and on the currency and the national banking system attracted much attention. He has published a volume of speeches (Philadelphia, 1865) and a "Life of Henry Clay" (Boston, 1887).

Start your search on Carl Schurz.