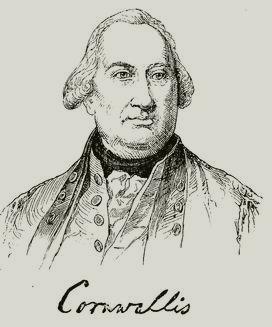 CORNWALLIS, Charles, Earl (afterward Marquis), British soldier, born in Brome, Suffolk, England, 31 December, 1737; died at Ghazepore, near Benares, India, 5 October, 1805. The family had been conspicuous in London since the reign of Edward III. In 1599 William Cornwallis was knighted for military services in Ireland. In 1627 his son Frederick was created a bare net by Charles I., and, being distinguished for his loyalty to the Stuarts, was raised in 1661 to the peerage as Baron Cornwallis of Eye, a rank that was held by his descendants till 1753, when Charles, the fifth baron, was created Earl Cornwallis and Viscount Brome. Charles had married in 1722 Elizabeth, daughter of Lord Townshend, and Charles was their sixth child and eldest son. He distinguished himself at Eton, and in 1756, being then known as Lord Brome, obtained an ensign's commission in the army, and spent the next two years at the famous military academy at Turin. In 1758 he was appointed aide-de-camp to Lord Granby, with the rank of captain, and was present at the battle of Minden in 1759. He was promoted to lieutenant colonel in 1761, and became noted for personal valor and the skill with which he handled his regiment. In July, 1762, on the death of his father, he became Earl Cornwallis, and soon afterward took his seat in the house of lords. In politics he was an extreme liberal, belonging to the party of "new Whigs" headed by Pitt and Shelburne. On the American question his sympathies were strongly with the colonists, and in the famous debate on the repeal of the stamp-act he was signalized as one of the five peers who voted in favor of unconditional repeal, accompanied by an explicit renouncement of the right of taxing America. In 1766 he was promoted to the rank of colonel.

In 1770 he was made constable of the tower of London and vice-treasurer of Ireland. In December, 1775, having reached the grade of lieutenant-general, he was ordered to America, and embarked in the "Bristol," of fifty guns, one of the fleet commanded by Sir Peter Parker. After a long delay at Cork for re-enforcements and a tempestuous voyage, the squadron reached the coast of the Carolinas in May, was defeated before Fort Moultrie in June, and then sailed northward to take part in the operations against New York. Lord Cornwallis took an active part in the battle of Long Island and the movements that followed down to the fall of Fort Washington. He then took possession of Fort Lee, which Greene had hastily abandoned, and conducted the pursuit of Washington's army through New Jersey. In December, considering Washington as disposed of and the war virtually at an end, Cornwallis returned to New York, intending to set sail for England. He had actually sent his luggage on board ship when the news of Washington's great stroke at Trenton upset his plans. He marched upon Trenton, and found the American army drawn up behind Assunpink creek in such a position that he hoped next day to capture it; but Washington, by a masterly device, withdrew during the night, marched around the left wing, and early in the morning routed his rear-guard at Princeton, causing him to retreat upon New Brunswick. In the brief campaign of June, 1777, when the British were compelled to abandon New Jersey, Cornwallis took the most important part. At the battle of Brandywine, 11 September, he conducted a flanking march, which secured the defeat of the Americans. On 26 September he occupied Philadelphia with the advance of the British army, and on 4 October moved to the support of General Howe at Germantown. In January, 1778, he returned to England on private business, but was again in America in May, and took part in the battle of Monmouth, 28 June. In December he was called back to England by the severe illness of his wife, who died soon afterward. Toward the end of 1779 he returned to America and accompanied Sir Henry Clinton on his expedition to South Carolina. In June, 1780, after the capture of Charleston, Sir Henry returned to New York, leaving Cornwallis the chief command at the south. His first adversary was the incompetent Gates, whom he defeated at Camden, 16 August, in the most disastrous battle ever fought by an American army.

After this great victory Cornwallis proceeded to invade North Carolina; but he had gone no farther than Charlotte, in Mecklenburg county, in the midst of a bitterly hostile population, when he was obliged to fall back on hearing news of the overwhelming defeat of his subordinate Ferguson at King's Mountain, 7 October, by the highland militia. On his second advance northward he had the brilliant Greene to contend with, and disasters thickened around him. First Morgan at the Cowpens annihilated his left wing under Tarleton, 17 January, 1781; then "Greene succeeded, in spite of him, in reuniting his main army with that of Morgan at Guilford Court-House, near the Virginia border, and at a great distance from Cornwallis's base of supplies. Thus forced to give battle against superior numbers and in a most disadvantageous position, Lord Cornwallis fought with great skill and as much success as was possible under the circumstances. The battle at Guilford Court-House, 15 March, 1781, was, for the numbers engaged, one of the most obstinate on record. After losing one third of his force in killed and wounded, Cornwallis barely succeeded in keeping possession of the field, but found it necessary next day to retreat, leaving his wounded behind. He fell back to Wilmington, on the coast, where he might hope for support from the fleet. Greene pursued him about fifty miles, and then, leaving him quite to himself, faced about and marched rapidly back to South Carolina to undertake the re-conquest of that state. The British army was so badly crippled that Cornwallis did not think it prudent to follow him, nor was he willing to acknowledge his defeat by embarking on the ships and returning to South Carolina by sea.

At this juncture of affairs, hearing that General Phillips had been sent with a considerable British force to Virginia, he decided to march northward and join him, hoping to deal a blow in Virginia, cut off Greene's connections with the northern states, and return to attack him with superior force. This plan was too extensive and hazardous to be likely to succeed. Cornwallis adopted it on the spur of the moment, on his own responsibility, and without waiting for his superior officer, Sir Henry Clinton, to sanction it; and in after-years it became the occasion of a bitter controversy between the two generals. On 25 April Cornwallis started from Wilmington, and on 20 May he effected a junction with Phillips at Petersburg. The youthful Lafayette, who commanded the American troops in Virginia and adopted a Fabian policy, foiled his hope of dealing a heavy blow. Cornwallis pursued Lafayette unsuccessfully from Richmond to the Rapidan, then, after some fruitless raids upon Charlottesville and Albemarle Court-House, he returned to Richmond, and presently began his retreat from the peninsula, closely followed by Lafayette, who had been re-enforced by Steuben and Wayne, until he was now superior m numbers. The campaign was ended the last week in July, when Cornwallis occupied Yorktown, while Lafayette took up a strong position on Malvern Hill and awaited further developments. In retreating to Yorktown the British general hoped to secure re-enforcements by sea; but in August the Count de Grasse arrived on the coast of Virginia with a powerful French fleet, and for the first time in the war the British lost control of the water. Washington was not slow to avail himself of this rare opportunity, and by one of the most brilliant movements recorded in the history of warfare suddenly moved his army from the Hudson River to the James and invested Yorktown with an overwhelming force. Thus placed between a hostile fleet and an army that outnumbered him more than two to one, Cornwallis was obliged to surrender, 17 October, 1781. The commissioners of the two armies met in the Moore House (see illustration, page 745) to agree upon the terms of capitulation. Two months afterward, having been exchanged for Henry Laurens, Lord Cornwallis returned to England.

In 1786, having been promoted to the rank of field-marshal, Cornwallis was appointed governor-general of India and commander-in-chief of the forces there. He was shortly afterward made a knight of the garter. In 1791-'2 he conducted in person the great war against Tippoo Sultan, captured Bangalore, invested Seringapatam, and concluded a treaty with Tippoo by which the latter surrendered more than half of his dominions to Great Britain. The reforms that he wrought in the civil service of India, and in its judicial and revenue systems, were wide-reaching and salutary. On his return to England in 1794 he was created a marquis for his services in India. In the following year he became master of the ordnance, with a seat in the cabinet. In 1798 he was appointed lord-lieutenant of Ireland and commander-in-chief of the forces there. This was just after the suppression of the rebellion, and Cornwallis remained in Ireland until the accomplishment of the parliamentary union between that country and Great Britain. Then in November, 1801, he was sent to France as one of the commissioners for negotiating the treaty that was completed and signed at Amiens, 29 March, 1802. Feeling his health to be :somewhat precarious, he now retired to his rural estate at Brome in the hope of spending the remainder of his life in seclusion. But in 1805 the troubles in India seemed to call for his skilful management, and he was again sent out as governor-general, but lived only a few months after his arrival. Among English public men there have been none more high-minded, disinterested, faithful, and pure, than Lord Cornwallis. As a military commander he was bold and vigilant, though unable to cope with the transcendent talents of Washington and Greene. He was by far the ablest of the generals sent by Great Britain to fight in America. He married, 14 July, 1768, Miss Jemima Jones, by whom he had one son and one daughter. The former succeeded to the marquisate, which became extinct by the failure of male heirs in the next generation. See Gleig's "Lives of the Most Eminent British Military Commanders" (London, 1832); Kaye's "Lives of Indian Officers" (London, 1867); and Johnston's "Yorktown Campaign" (New York, 1881).

Start your search on Charles Cornwallis.