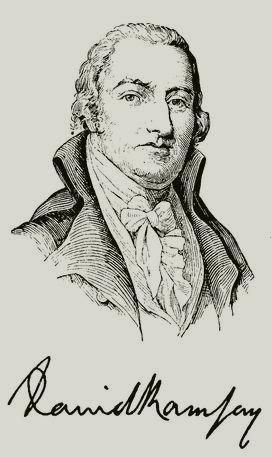 RAMSAY, David, physician, born in Lancaster county, Pennsylvania, 2 April, 1749; died in Charleston, South Carolina, 8 May, 1815. He was graduated at Princeton in 1765, at the medical department of the University of Pennsylvania in 1773, meanwhile teaching for several years. Settling in Charleston, he soon acquired celebrity as a physician, and also was active with his pen in behalf of colonial rights. At the beginning of the Revolutionary war he took the field as a surgeon, and served during the siege of Savannah. He was an active member of the South Carolina legislature in 1776-'83, and a member of the council of safety, in which capacity he became so obnoxious to the British that, on the capture of Charleston in May, 1780, he was included among the forty inhabitants of that place that were held in close confinement at St. Augustine for eleven months as hostages. Dr. Ramsay was a delegate to the Continental congress in 1782-'6, long a member of the South Carolina senate, and its president for seven years. His death was the result of wounds that he received from the pistol of a maniac, concerning whose mental unsoundness he had testified. During the progress of the Revolution, Doctor Ramsay collected materials for its history, and his great impartiality, his fine memory, and his acquaintance with many of the actors in the contest, eminently qualified him for the task. His occasional papers relating to the times had considerable popularity. Among these was a " Sermon on Tea," from the text "Touch not, taste not, handle not," and an "Oration on American Independence" (1778). His other works include "History of the Revolution of South Carolina from a British Province to an Independent State " (Trenton, 1785); " History of the American Revolution" (Philadelphia, 1789); " On the Means of Preserving Health in Charleston and its Vicinity " (Charleston, 1790) ; "Review of the improvements, Progress, and State of Medicine in the Eighteenth Century" (1802) ; " Life of George Washington" (New York, 1807); "History of South Carolina from its Settlement in 1670 to the Year 1808" (Charleston, 1809) ; "Memoirs of Mrs. Martha Laurens Ramsay, with Extracts from her Diary" (1811) ; "Eulogium on Dr. Benjamin Rush " (Philadelphia, 1813); "History of the United States, 1607-1808," continued to the treaty of Ghent by Samuel S. Smith and others (Philadelphia, 1816-'17), forming the first three volumes of "Universal History Americanized, or an Historical View of the World from the Earliest Records to the Nineteenth Century, with a Particular Reference to the State of Society, Literature, Religion, and Form of Government of the United States of America" (12 vols., 1819). Dr. Ramsay married, first, Frances, a daughter of John Witherspoon, and then Martha, daughter of Henry Laurens.--His second wife, Martha Laurens, born in Charleston, South Carolina, 3 November, 1759; died there, 10 June, 1811, accompanied her father, Henry Laurens, on his missions abroad, and so spent ten years of her early life in England and France. While Mr. Laurens was minister at Paris he presented his daughter with 500 guineas, with part of which she purchased 100 French testaments and distributed them among the destitute of Vigan and its vicinity, and with the rest she established a school. In 1785 she returned to Charleston, and in 1787 she married Dr. Ramsay. Subsequently she assisted her husband in his literary work, and prepared her sons for college. See "Memoirs of Mrs. Martha Laurens Ramsay, with Extracts from her Diary" by her husband (Charleston, 1811).--Dr. Ramsay's brother, Nathaniel, soldier, born in Lancaster county, Pennsylvania, 1 May, 1751: died in Baltimore, Maryland, 23 October, 1817, was graduated at Princeton in 1767, and, after studying law, was admitted in 1771 to the Maryland bar. In 1775 he was a delegate from his county to the Maryland convention, and continued active in the American cause, becoming in 1776 captain in the first battalion that was raised in the state. He reached the army in time to take part in the battle of Long Island, and continued under Washington, attaining the rank of lieutenant-colonel commandant of the 3d regiment of the Maryland line. When General Charles Lee's command retired before the British troops at Monmouth, Washington called to him Colonel Charles Stewart and Colonel Ramsay, and, taking the latter by the hand, said: " I shall depend on your immediate exertions to check with your two regiments the progress of the enemy till I can form the main army." Colonel Ramsay maintained the ground he had taken till he was left without troops. In this situation he engaged in single combat with some British dragoons, and was cut down and left for dead on the field. This important service arrested the progress of the British army, and gave time to the commander-in-chief to bring up and assign proper positions to the main army. Colonel Ramsay was then captured, and subsequently saw no active service. A long period was passed on parole or in imprisonment, and when exchange brought release his place had been filled. After the war he resumed the practice of his profession, and represented Maryland in congress during 1786-'7. He was made marshal of the district of Maryland in 1790, and again in 1794, in addition to which he received the appointment of naval officer for the district of Baltimore in 1794, which he held during five administrations.

Start your search on David Ramsay.