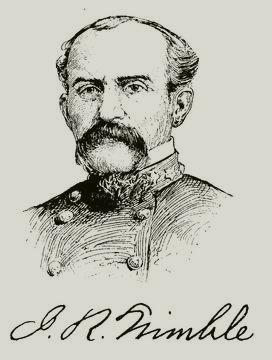 TRIMBLE, David, manufacturer, born in Frederick county, Virginia, about 1782 ; died in Trimble's Furnace, Kentucky, 26 October, 1842. He was educated at William and Mary college, studied law, and removed to Kentucky in 1804. He was engaged in the war of 1812, and served during two campaigns under General William Henry Harrison. In 1817 he was elected to congress, where he served without interruption till 1827, and was highly esteemed for his integrity and devotion to his public duties. After retiring from congress he engaged in agriculture and iron manufacture, and in the latter industry did much to develop the resources of the state. --His nephew, Isaac Ridgeway, soldier, born in Culpeper county, Virginia, 15 May, 1802; died in Baltimore, Maryland, 2 January, 1888, was the son of John Trimble, who removed to Kentucky in 1805 and settled on the military reservation at Fort Stirling. His uncle David procured him the appointment of cadet at the United States military academy, where he entered in 1818, making the entire journey on horseback, and generally by night, to avoid being attacked by Indians. He was graduated in 1822, and detailed to survey the military road from Washington to Ohio river, He also served at Boston and New York. He resigned in 1832, and pursued the profession of civil engineering. In 1834 he became chief engineer of the Baltimore and Susquehanna railroad, which he completed to York, Pennsylvania, in 1837. He was also chief engineer of the Philadelphia, Wilmington, and Baltimore railroad, and of the Boston and Providence railroad. He was engaged in large railroad operations in the West Indies when the civil war began in 1861, and was on the point of setting out from Cuba when he was assigned to the command of the non-uniformed volunteers that were organized to defend Baltimore from northern troops He entered the military service state of Virginia in May, 1861, as colonel of engineers, and was ordered by General Robert E. Lee to take charge of the construction of the field-works and forts for the defence of Norfolk. Upon their completion he was promoted brigadier, and ordered to report to General Joseph E. Johnston at Centreville, who directed him to locate and construct batteries at Evansport on Potomac river, so as 1o close that river against United States vessels. With them he effectually blockaded the river during the winter of 1861-'2. In November, 1861, he was assigned to the command of the 7th brigade of Ewell's division, and when General Ewell was ordered to report to General Thomas J. Jackson in May, 1862, Trimble took an active part in the campaign that ensued against General Nathaniel P. Banks, General John C. Fremont, and General James Shields. He selected the Confederate position for the battle of Cross Keys, 8 June, 1862, with the consent of General Ewell, who gives him credit for it in his report, He led his brigade at the battle of Gaines's Mills and the subsequent seven days' battles. At the battle of Slaughter's Mountain, 12 August, 1862, between the armies of General John Pope and General Jackson, he did good service, and on the night of 27 August, 1862, with the 21st North Carolina and 21st Georgia regiments, he captured Manassas Junction, with supplies of subsistence, clothing, and ammunition. For this General Jackson recommended his promotion to be major-general. When Jackson was promoted to command a corps he selected General Trimble to succeed him in command of his division. Trimble was wounded at the second battle of Bull Run, 28 August, 1862, was appointed major-general on 23 April, 1863, commanded a division of the 2d corps at Chancellorsville, and in June, 1863, General Lee offered him the command of the valley district to form the left wing of the Army of Northern Virginia. He was in General George E. Pickett's charge on the third day of the battle of Gettysburg, where he was wounded and captured, and lost a leg. He remained in prison at Johnson's island twenty-one months, and was exchanged in April, 1865. Hastening to rejoin General Lee, on reaching Lynchburg he found that Lee had surrendered the day before at Appomattox. He then returned to Baltimore, where he remained until his death.

Start your search on David Trimble.