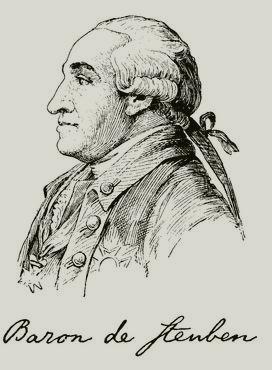 STEUBEN, Frederick William Augustus Henry Ferdinand yon, known in this country as BARON STEUBEN, German soldier, born in Magdeburg, Prussia, 15 November, 1730; died in Steubenville, New York, 28 November, 1794. His father, a captain in the army, took him when a mere child into the Crimea, whither he was ordered. The boy was only ten years old when the father returned to Prussia. He was educated in the Jesuit colleges at Neisse and Breslau, and distinguished himself as a mathematician. At fourteen he served with his father in the war of 1744, and was present at the siege of Prague. At the age of seventeen he entered as cadet in an infantry regiment, and in two years was promoted to ensign, and four years afterward to lieutenant. He served in the seven years' war and was wounded in the battle of Prague. In 1754 he was made adjutant-general in the free corps of General John von May, but after the death of the latter he re-entered the regular army in 1761, and was taken prisoner by the Russians at the capitulation of Colberg. In 1762 he was made aide to Frederick the Great, and took part in the celebrated siege of Schweidnitz, which closed the military operations of the seven years' war. Resigning his post in the army, he was presented with the canonry of the cathedral of Haselberg on a salary of 1,200 florins, and afterward was made grand marshal to tile Prince of Hohenzollern, with an additional salary of 1200 florins. Although he received brilliant offers from the king of Sardinia and emperor of Austria to enter their service, he declined, and, with a salary that enabled him to live in elegant ease, he felt no desire to re-enter military life. But in 1777, while on his way to England to visit some English noblemen, he spent some time at Paris. Meeting here Count St. Ger-main, the French minister of war, who, knowing that the great weakness of the American colonists lay in their ignorance of military tactics and want of discipline, endeavored to persuade him to come to this country and instruct the soldiers. But the baron declined to give up his honors and his ample income and risk everything on our desperate fortunes. The French minister, however, brought about an interview with Benjamin Franklin and Silas Deane. The manner with which the former received him offended him, and this, with other reasons, caused him to abandon the project altogether. Recalled by Germain, he at length yielded to the latter's solicitations and promises, and resolved to cast his fortunes with the struggling colonies. Embarking in a French gun-boat under the name of Frank, he set sail from Marseilles, 11 December, 1777, and after a stormy passage of fifty-five days, during which the forecastle took fire three times while there were 1,700 pounds of powder aboard, and a mutiny was suppressed, he arrived at Portsmouth, New Hampshire The entire population went out to receive him. He at once wrote to congress, offering his services to the colonies, saying that the motive that brought him here was to "serve a nation engaged in the noble work of defending its rights and liberties," and adding that, although he had "given up an honorable title and lucrative rank," he asked "neither riches nor honors." To Washington he expressed the same sentiments, and said he wished to serve simply as a volunteer. He immediately began his journey inland for the south. A Tory landlord, in the course of the journey, declared that. he had neither bed nor provisions for the party. Steuben levelled his pistol at the man's head and demanded both. They were quickly furnished, and in the morning the baron liberally rewarded his host in continental money. Presenting himself to congress, he proposed to enter the army as a volunteer, and, if his "services were not satisfactory or the colonies failed to establish their independence, he was to receive nothing." If, on the other hand, they were successful and he remained in the army, he expected "to be refunded the income he had given up, and remunerated for his services." This generous offer was accepted, and he departed for Valley Forge, where the American army lay encamped. When the aide-de-camp of Frederick the Great reached the wintry encampment and saw the half-starved soldiers creep out of their huts, poorly armed and only half clad, he was astounded and said "no European army could be kept together a week in such a state." A less noble and less resolute nature would have abandoned his enterprise at the outset. He began at once, and from that day our whole military system assumed new shape. The awkwardness of the men, at times, would throw him into terrible rage, but his kindness, care, and liberality toward the suffering soldier made him beloved by all. In May, 1778, congress, acting under the advice of Washington, made him inspector-general of the army with the rank of major-general, and he at once entered on his duties and appointed sub-inspectors throughout the army. A thorough system of discipline and economy was established, until the whole army became a single machine in his hands. It is impossible to give in detail the great work he accomplished. It was unseen by the country in general, for it was unattended with outward display, but it can be safely said that no major-general in the field did half so much toward our success as this great organizer and disciplinarian. The result of this discipline was seen in the next campaign, in the battle of Monmouth, when he rallied the retreating and disordered troop of General Charles Lee like veterans. He commanded here the left wing, and Alexander Hamilton. who saw the steady action of the troops under Baron Steuben, said he " had never known till that day the value of discipline."

In the trial of Lee that followed, the testimony of Steuben offended the former, and he made some disparaging remarks in regard to it. Steuben instantly challenged him, but Lee apologized, and nothing came of the matter. Steuben now wished to take command in the field as major-general, but the American officers manifested so much opposition to it, on account of being outranked, that he withdrew his request and devoted himself to his old monotonous work, much of which seemed to him more befitting a drill-sergeant than a major-general. In the autumn of 1780 he published a manual for the army, furnished with diagrams to explain his rules. It was entitled " Regulations for the Order and Discipline of the Troops of the United States." Each chapter was written first in poor German, then translated into poor French, then put into good French, and lastly into good English, in which last condition it was entirely unintelligible to Steuben. It nevertheless served its purpose, became the law and guide of the army, and, even after the war, was adopted by several of the states. In this year he was selected as one of the court-martial to try Major John AndrG. After the defeat of General Horatio Gates at Camden he was sent to Virginia to aid General Nathanael Greene, then operating in North Carolina. Although he now had his desire--a separate command--it was of little consequence to him, as his chief duty was to forward troops to Greene as fast as he could raise them. The result was, when Arnold invaded Virginia he had only 150 men under him, and he was compelled to see the traitor ravage the country before his eyes; but he did everything in his power to harass him. Soon afterward Cornwallis was besieged in Yorktown, and Steuben took his place as major-general in the line. He was in the trenches when the proposition to surrender was received. Lafayette came to relieve him; but this he refused, declaring that European etiquette required that the officer that received the first overtures of surrender must, out of respect to his command, keep his post till the terms of capitulation were agreed upon or hostilities resumed. After the close of the war he was sent to Canada to demand the surrender of the posts on the frontier, but, not succeeding, he returned to headquarters. He now retired to private life and resided in New York city, where he remained for several years. Congress refused to fulfil its contract with him to pay him for his services, but he was given grants of land in Virginia, Pennsylvania, and New Jersey. The latter he declined to accept when he found it consisted of the confiscated estates of an old Tory who would be left destitute, and, in the kindness of his heart, interceded for him. He was given also a whole township near Utica, New York, and, after seven years' delay, congress at length allowed him a pension of $2,400. He now retired to this land, and, clearing off sixty acres, built a log-house, seen in the illustration, and settled down for life, though he returned every winter to New York city. On 22 November, 1795, as he was making preparations for this annual visit, he was struck with paralysis, and three days afterward he died. As he had requested, he was buried near his house, with his military cloak around him and the star of honor that he always wore on his breast. Only about thirty farmers attended his funeral. Colonel North, his favorite aide, to whom he left all his property, erected a Simple monument over his grave, to which many visitors anually resort. Numerous anecdotes are told of him, illustrating the tenderness and generosity of his nature. These traits were especially exhibited at the breaking up of the army at Newburg. His life has been written by Francis Bowen, in Sparks's "American Biography," and by Friedrich Kapp (New York, 1860).