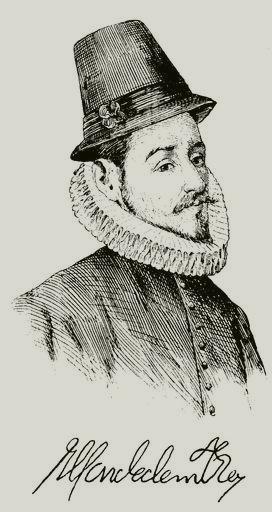 ZUNIGA y ACEVEDO, Gaspar de, Count de Monterey, viceroy of Mexico and Peru, born in Andalusia about 1540; died in Lima, Peru, 10 February, 1606. Being appointed to succeed in Mexico Luis de Velasco the younger, who had been promoted to Peru, he sailed from Spain in 1595, and took charge of the government on 5 November of that year. He was a protector of the native race, and nearly every Sunday went personally to the square to superintend the hiring of the Indians and prevent abuses by the employers and inferior authorities. In 1596 he despatched an expedition under Sebastian Vizcayno for the exploration and colonization of Lower California, which returned in the next year without accomplishing much for want of provisions. An English buccaneer, William Park, surprised and captured the city of Cam-peachy in 1597, obliging the alcalde to take refuge with a small force in the convent of San Francisco, but during the sacking of the town the governor returned from an expedition, and, joining the forces of the alcalde, totally defeated the English, forcing them to re-embark with heavy loss. In 1600 the city of Vera Cruz was removed from the former unhealthy locality to the present site opposite San Juan de Ulua, and in the same year an expedition under Juan de Onate and Vicente Zaldivar was sent for the conquest of New Mexico. By order of the king, Zuniga despatched, in 1602, a second expedition under Sebastian Vizcayno to explore the coast of Upper California and acquire information about the fabulous Strait of Aniano That expedition named the Bay of Monterey in honor of the viceroy, and given to a colony that was founded in New Leon. In 1603 Zuniga was promoted viceroy of Peru, and, on the arrival of his successor, he delivered the government in October, to the great sorrow of the natives, who thronged, weeping, round their benefactor to take leave of him. The settling of his private affairs and detentions in Panama and Paita delayed him for more than a year, and he did not enter Lima till 28 November, 1604. With great activity he concluded the preparations for the fleet that was about to be sent by royal order for the exploration of the South sea under Pedro Fernandez Quires. It sailed on 21 December, 1605, and shortly afterward he died, without being able to execute numerous measures that he had prepared for the benefit of the country.