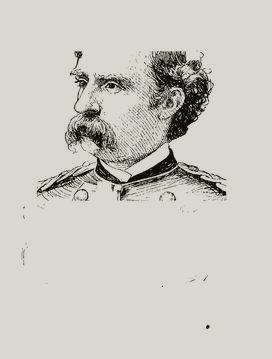 CUSTER, George Armstrong, soldier, born in New Rumley, Harrison County, Ohio, 5 December 1839; died in Montana, 25 June 1876. He was graduated at the U. S. military academy in June 1861, and reported for duty at Washington. General Winfield Scott gave him dispatches to carry to General Irwin McDowell, then in command of the Army of the Potomac, he was assigned to duty as lieutenant in the 5th cavalry, and participated, on the day of his arrival at the front, in the first battle of Bull Run. General Philip Kearny selected him as his first aide-de-camp, and he afterward served on the staff of General William F. Smith. While on this duty he was given charge of the balloon ascensions, to make reconnaissances.

In May 1862, General George B. McClellan was so impressed with the energy and perseverance that he showed in wading the Chickahominy alone, to ascertain what would be a safe ford for the army to cross, and with his courage in reconnoitering the enemy's position while on the other side, that he was appointed aide-de-camp, with the rank of captain, to date from 15 June 1862. Captain Custer applied at once for permission to attack the picket-post he had just discovered, and at daylight the next morning surprised the enemy, drove them back, capturing some prisoners and the first colors that were taken by the Army of the Potomac. After General McClellan's retirement from command of the army, Captain Custer was discharged from his volunteer appoint-merit and returned to his regiment as lieutenant. He had served there but a short time when General Alfred Pleasonton, on 15 May 1863, made him aide-de-camp on his staff. For daring gallantry in a skirmish at Aldie and in the action at Brandy Station, as well as in the closing operations of the Rappahannock campaign, he was appointed brigadier-general of volunteers, dating from 29 June 1863, and assigned to duty as commander of the Michigan brigade. At Gettysburg his brigade, together with those of Gregg and McIntosh, defeated General Stuart's efforts to turn the left flank. For this action was brevetted major in the U.S. army, to date from 3 July 1863. At Culpepper Court-House he was wounded by a spent ball, which killed his horse, he took part in General Sheridan's cavalry raid toward Richmond, in May 1864, and was brevetted lieutenant colonel for gallant and meritorious services in the battle of Yellow Tavern, 11 May. In General Sheridan's second raid on Richmond the Michigan brigade made a most gallant fight at Trevillion Station; but so great was their peril that the colors of the brigade were only saved from capture by General Custer's tearing them from the standard, held in the grasp of a dying color-sergeant, and concealing the flag in his bosom. On 19 September 1864, he was made brevet-colonel, U. S. army, for gallantry at the battle of Winchester, and on 19 Oct. he was brevetted major-general of volunteers for gallantry and meritorious services at Winchester and Fisher's Hill. On 30 Sept. he assumed command of the 3d division of cavalry, with which he fought the brilliant battle of Woodstock on 9 Oct., where his former classmate at West Point, the Confederate General Rosser, confronted him. He drove the enemy twenty-six miles, capturing everything they had on wheels except one gun. At Cedar Creek he confronted the enemy from the first attack in the morning until the battle ended. The 3d division recaptured, before the day was over, guns and colors that had been taken from the army earlier in the fight, together with Confederate flags and cannon. After this brilliant success General Custer was sent to Washington in charge of the captured colors, and recommended for promotion. In the spring of 1865, when General Sheridan moved his cavalry toward Richmond again, the 3d division fought alone the battle of Waynesboro. The enemy's works were carried, and 11 guns, 200 wagons, 1,600 prisoners, and 17 battle-flags were captured. On reaching Fred-Rickshall Station, General Custer found that General Early had rallied from his retreat at Waynesboro and was preparing for another attack. He therefore sent a regiment to meet him at once. General Early was nearly captured, his command destroyed, and a campaign ended in which he lost his army, every piece of artillery, and all his trains. For gallant and meritorious services at the battles of Five Forks and Dinwiddie Court-House, Gen Custer was brevetted brigadier-general, U. S. army, to date from 13 March 1865. In a general order addressed to his troops, dated at Appomattox Court House, 9 April 1865, General Custer said: