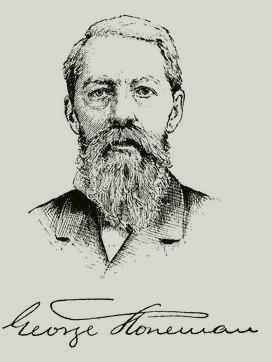 STONEMAN, George, soldier, born in Busti, Chautauqua County, New York, 8 August, 1822. He was graduated at the United States military academy in 1846, and entered the 1st dragoons. He acted as quartermaster to the Mormon battalion at Santa Pd, was sent with it to California in 1847, and remained actively engaged on the Pacific coast till 1857. In March of this year he became captain in the 2d cavalry, and served till 1861, chiefly in Texas In February of that year, while in command of Fort Brown, he refused to obey the order of his superior, General David E. Twiggs, for the surrender of the government property to the secessionists, evacuated the fort, and went to New York by steamer. He became major of the 1st cavalry on 9 May, 1861, and served in western Virginia till 13 August, when he was appointed brigadier-general of volunteers and chief of cavalry of the Army of the Potomac. He organized the cavalry of that army and commanded during the Virginia peninsular campaign of 1862. After the evacuation of Yorktown by the Confederate troops his cavalry and artillery pursued and overtook them, and thus brought on the battle of Williamsburg, 5 May, 1862. He took command of General Philip Kearny's division after the second battle of Bull Run, succeeded General Samuel P. Heintzelman as commander of the 3d army corps, 15 November, 1862, and led it at Fredericksburg on 13 December He was promoted major-general, 29 November, 1862, led a cavalry corps in the raid toward Richmond from 13 April till 2 May, 1863, and commanded the 23d corps from January till April, 1864. On the reorganization of the armies operating against Richmond by General Grant, General Stone-man was appointed to a cavalry corps in the Department of the Ohio, was engaged in the operations of the Atlanta campaign m May-July, 1864, and conducted a raid for the capture of Macon and Andersonville and the liberation of prisoners, but was captured at Clinton, Georgia, 31 July, and held a captive till 27 October He led a raid to southwestern Virginia in December, 1864, commanded the district of east Tennessee in February and March, 1865, conducted an expedition to Asheville, North Carolina, in March-April, 1865, and was engaged at Wytheville, the capture of Salisbury North Carolina, and at Asheville. He became colonel of the 21st infantry, 28 July, 1866, and was brevetted colonel, brigadier, -and major-general for gallant conduct. He retired from the army, 16 August, 1871, and has since resided in California, of which he was governor in 1883-'7, having been chosen as a Democrat.

Start your search on George Stoneman.