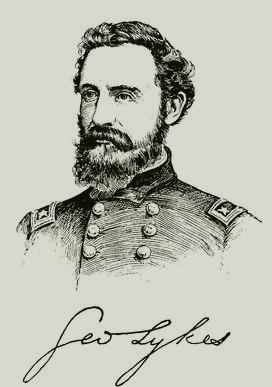 SYKES, George, soldier, born in Dover, Delaware, 9 October, 1822; died in Brownsville, Texas, 9 February, 1880. He was appointed from Maryland to the United States military academy, and on his graduation in 1842 was assigned to the 3d infantry, with which he served in the latter part of the Florida war, and then in the west and in promoted 1st lieutenant, 21 September, 1846, and during the Mexican war was engaged at Monterey, Vera Cruz, Cerro Gordo (where he was brevetted captain for gallantry), Contreras, Churubusco, and the capture of the city of Mexico. He was commissary of General Twiggs's division in Mexico in 1847-'8, and was then on frontier and garrison duty till the civil war, taking part in skirmishes with the Apaches in 1854, and in the Navajo expedition of 1859, and reaching the rank of captain on 30 September, 1855. He became major of the 14th infantry, 14 May, 1861, was at the battle of Bull Run, and then commanded the regular infantry in Washington till March, 1862, and was commissioned brigadier-general of volunteers, 28 September, 1861. He took part in the peninsula campaign at the head of the division of regulars in Fitz-John Porter's corps, receiving the brevet of colonel for gallantry at Gaines's Mills, and in the succeeding operations of the Army of the Potomac, becoming major-general of volunteers on 29 November, 1862, and commanding the 5th corps after the battle of Chancellorsville. He was at the head of this corps at Gettysburg, and so continued till 20 April, 1864, when he was ordered to Kansas. At the close of the war he received the brevet of brigadier-general, United States army, for services at Gettysburg, and major-general for "gallant and meritorious services in the field" during the war. He had reached the regular army rank of lieutenant-colonel on 16 October, 1863, and on 12 January, 1868, he became colonel of the 20th infantry. From this time till his death he commanded various posts, and after 1877 he was in charge of Fort Brown, Texas On motion of Senator Burnside, congress appropriated $1,000 for the removal of his remains to the cemetery at West Point, where he now lies buried, and where a fine monument has been erected to his memory by his many friends.

Start your search on George Sykes.