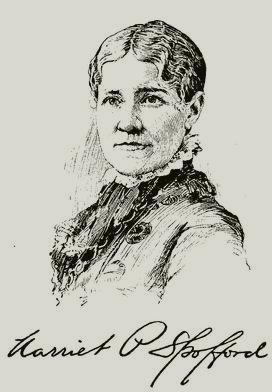 SPOFFORD, Harriet Prescott, author, born in Calais, Maine, 3 April, 1835. She is the daughter of Joseph N. Prescott and elder sister of Mary N. Prescott. She was taken in youth by her parents to Newburyport, Massachusetts, which has ever since been her home, though she has spent many of her winters in Boston and Washington. She attended the Putnam free schoolin heradopted city, and later the Pinkerton academy at Derry, New Hampshire, where she was graduated at seventeen years of age. At Newburyport her prizeessay on Itamlet drew the attention of Thomas Went-worth Higginson, who soon became her friend, and gave her counsel and encouragement. Her father was attacked with slow paralysis about 1850, which rendered him incapable of exertion during the remainder of his life. This misfortune preyed upon the mind of her mother, and rendered her a confirmed invalid. As Harriet was the eldest child, she felt the need of making her talents available, and began courageously to work, contributing to the story-papers of Boston, earning small pay with a great deal of labor. She once wrote fifteen hours a day, and continued her toil for years. These early stories have never been acknowledged or collected. In the "Atlantic Monthly," in 1859, appeared a sparkling story of Parisian life, bearing the title "In a Cellar." James Russell Lowell, then editor of the magazine, admired it. but refrained from publishing it, under the belief that it must be a translation from the French, until he was assured that it was written by Harriet Prescott. The story made her reputation, and she became from that day a welcome contributor, both of prose and poetry, to the chief periodicals of the country. Her fiction has very little in common with what is regarded as representative of the New England mind. It is ideal, intense in feeling, and luxuriant in expression. In her descriptions and fancies she revels in sensuous delights and every variety of splendor. In 1865 she married Richard S. Spofford, a lawyer of Boston, cousin of Henry M. Spofford, mentioned below. Their home is now on Deer island, in Merrimack river, in the suburbs of Newburyport. Mrs. Spofford's books are "Sir Rohan's Ghost" (Boston, 1859); "The Amber Gods, and other Stories" (Boston, 1863); "Azarian" (1864) ; "New England Legends" (1871) ; " The Thief in the Night " (1872) ; " Art Decoration applied to Furniture" (New York, 1881); "Marquis of Carabas" (Boston, 1882)" "Poems" !1882); "Hester Stanley at St; Mark's" (1883)" The Servant-Girl Question (1884): and "Ballads about Authors " (1888).