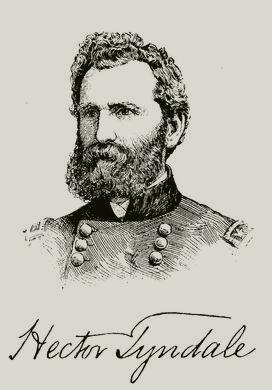 TYNDALE, Hector, soldier, born in Philadelphia, 24 March, 1821; died there, 19 March, 1880. His father was a merchant engaged in the importation of china and glassware, and young Tyndale succeeded to the business in 1845, in partnership with his brother-in-law, Edward P. Mitchell. He made several tours of Europe, inspecting closely all the chief factories, and becoming practically familiar with the whole art of pottery. His natural taste, thus cultivated, made him a most expert connoisseur, and led to his selection in 1876 as one of the judges of that section of the Centennial exhibition, in which capacity he wrote the elaborate report on pottery. His private collection was one of the most complete in the country. He first became interested in politics in 1856 as a Free-soiler, and was a member of the first Republican committee in Philadelphia. He was not an Abolitionist, and had neither knowledge of nor sympathy with John Brown's raid, but when Mrs. Brown came to Philadelphia on her way to pay her last visit to her husband and bring back his body after his execution, she was without escort and was believed to be in personal danger. An appeal was made to Tyndale, who at once accepted the risks and dangers of escorting her. In the course of this self-imposed duty he was subjected to insults and threats, and on the morning of the execution was shot at by an unseen assassin. It had been threatened in the more violent newspapers of the south that John Brown's body should not be restored to his friends, but ignominiously treated, and a "nigger's" body substituted for his friends. When the coffin was delivered to Tyndale by the authorities, he refused to receive it until it was opened and the body was identified. He was in Europe when he heard the news of the firing on Fort Sumter, and at once returned home and offered his services to the government. He was commissioned major of the 28th Pennsylvania regiment in June, 1861, and in August was put in command of Sandy Hook, opposite Harper's Ferry. The regiment fought in twenty-four battles and nineteen smaller engagements, in all of which Tyndale took when he was disabled by wounds He was promoted to lieutenant-colonel in April, 1862, and served in General Nathaniel P. Banks's corps in the Shenandoah valley, under General John Pope at Chantilly and the second battle of Bull Run, and later in General Joseph K. F. Mansfield's corps. At Antietam, as the senior officer, he commanded a brigade in General George S. Greene's division of the 12th corps, holding the ground in front of the Dunker church against three separate assaults of the enemy, in which the brigade captured seven battle-flags and four guns. Early in the day he received a wound in the hip, but he kept the field until the afternoon, when he was struck in the head by a musket-ball and carried off the field. For "conspicuous gallantry, self-possession, and good judgment at Antietum" he was promoted to brigadier-general of volunteers, 29 November, 1862. After slow and partial recovery from his wounds he applied for active duty, and in May, 1863, was assigned to a brigade under General Erasmus D. Keyes near Yorktown, and served with the Army of the Potomac until September, when he was sent with General Joseph Hooker to the relief of Chattanooga. In the battle of Wauhatchie he carried by a bayonet charge a hill (subsequently known as Tyndale's hill), thus turning the flank of the enemy and relieving General John W. Geary's division from an assault by superior numbers. He also participated in the series of battles around Chattanooga, and in the march to the relief of Knoxville. He was sent home on sick-leave in May, 1864, and, finding his disability likely to be lasting, he resigned in August. In March, 1865, he was brevetted major-general of volunteers for gallant and meritorious services during the war. In 1868 he was the Republican nominee for mayor of Philadelphia, and was defeated by 68 votes in a poll of more than 120,000. In 1872 his kinsman, Professor John Tyndall, of London, delivered a series of lectures in this country, and resolving to devote the proceeds to the establishment of a fund "for the promotion of science in the United States by the support in European universities or elsewhere of American pupils who may evince decided talents in physics," he appointed General Tyndale with Professor Joseph Henry and Dr. Edward L. Youmans trustees. Professor Tyndall in 1885 changed the trust and established three scholarships, in Harvard, Columbia, and the University of Pennsylvania. The last-named institution called its share the Hector Tyndale scholarship in physics.

Start your search on Hector Tyndale.