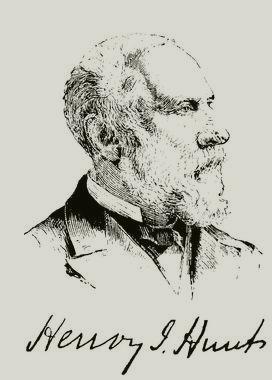 HUNT, Henry Jackson, soldier, born in Detroit, Michigan. 14 September, 1819. His grandfather, Thomas (1754-1809), served in the Revolution, and at the time of his death was colonel of the 1st infantry; and his father, Samuel W., lieutenant in the 3d infantry, died in September, 1829. Henry accompanied his father on the expedition that established Fort Leavenworth in 1827, and, after attending school in Missouri, entered the United States military academy, where he was graduated in 1839. He served in the 2d artillery on the frontier during the Canada border disturbances of that year, in garrisons at Fort Adams, Rhode Island, and Fort Columbus and Fort Hamilton, New York, and on recruiting service till 18 June, 1846, when he was promoted to 1st lieutenant. During the Mexican war he was brevetted captain for gallantry at, Contreras and Churubusco, and major at Chapultepee, and he was at Vera Cruz. Cerro Gordo, San Antonio, Molino del Rey, where he was twice wounded, and at the capture of the city of Mexico. He was then on frontier duty till the civil war, with the exception of service in 1856-'7 and 1858-'60 on a board to revise the system of light artillery tactics. He had become captain, 28 September, 1852, was promoted to major, 14 May, 1861, and commanded the artillery on the extreme left in the battle of Bull Run. He was chief of artillery in the defences of Washington from July to September, 1861, and on 28 September became aide to General McClellan with the rank of colonel. In 1861-'2 he was president of a board to test rifled field guns and projectiles, and organized the artillery reserve of the Army of the Potomac, commanding it in the peninsular campaign of 1862. In September, 1862, he was made brigadier-general of volunteers, and became chief of artillery of the Army of the Potomac, holding the office till the close of the war, and taking an active part in all the battles that were fought by that army in 1862-'5. He was brevetted colonel, 3 July, 1863, for his services at Gettysburg, major-general of volunteers, 6 July, 1864, for "faithful and highly meritorious services" in the campaign from the Rapidan to Petersburg, brigadier-general in the regular army for his services in the campaign ending with Lee's surrender, and major-general, United States army, 13 March, 1865, for services during the war. He was president of the permanent artillery board in 1866, and then commanded various forts, being promoted to colonel of the 5th artillery, 4 April, 1869. He was retired from active service, 14 September, 1883, and is now (1887) governor of the Soldiers' home, Washington, D. C. General Hunt has published "Instruction for Field Artillery" (Philadelphia, 1860), and is the author of various papers on artillery, projectiles, and army organization. In 1886 he contributed to the "Century" three articles on the battle of Gettysburg. --His brother, Lewis Cass, soldier, born in Fort Howard, Green Bay, Wisconsin, 23 February, 1824; died in Fort Union, New Mexico, 6 September, 1886, was graduated at the United States military academy in 1847, and assigned to the infantry. He became captain, 23 May, 1855, and served on the Pacific coast till the civil war. He was stationed in Washington territory in 1859, when General Harney occupied San Juan island in Puget sound, which was then claimed by Great Britain, and, when a joint occupation of the island by British and United States forces was arranged by General Scott, was chosen to command the American detachment. After serving in the first part of the peninsular campaign of 1862, he became on 21 May of that year colonel of the 92d New York regiment, and was severely wounded at Fair Oaks. He was made brigadier-general of volunteers 29 November, 1862, and in the winter of 1862-'3 served in North Carolina, receiving the brevet of colonel for gallantry at Kinston. He was made major in the 14th infantry, 8 June, 1863, had charge of the draft rendezvous at New Haven, Connecticut, in 1863-'4, and, after special duty in Missouri and Kansas, commanded the defences of New York harbor in 1864-'6. He was brevetted brigadier-general in the regular army, 13 March, 1865, for his services in the war, and afterward commanded various posts, becoming lieutenant-colonel of the 20th infantry, 29 March, 1868. He was transferred to the 4th infantry on 25 February, 1881, and promoted to colonel of the 14th infantry on 19 May.