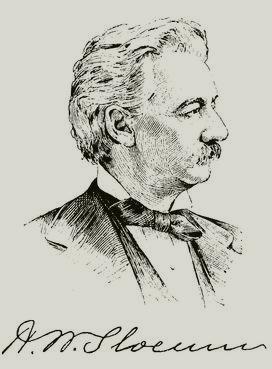 SLOCUM, Henry Warner, soldier, born in Delphi, Onondaga County, New York, 24 September, 1827. He was graduated at the United States military academy in 1852, appointed 2d lieutenant in the 1st artillery, and ordered to Florida the same year. He was promoted 1st lieutenant in 1855, but resigned in October, 1856, and, returning to New York, engaged in the practice of law at Syracuse, and was a member of the legislature in 1859. At the opening of the civil war he tendered his services, and, on 21 May, 1861, was appointed colonel of the 27th New York volunteers. He commanded this regiment at the battle of Bull Run on 21 July, where he was severely wounded, on 9 August was commissioned brigadier-general of volunteers, and was assigned Io the command of a brigade in General William B Frauldin's division of the Army of the Potomac In the Virginia peninsula campaign of 1862 he was engaged in the siege of Yorktown and the action at West Point, Virginia, and succeeded to the command of the division on 15 May, on Franklin's assignment to the 6th corps. At the battle of Gaines's Mills, 27 June, he was sent with his division to re-enforce General Fitz-John Porter, who was then severely pressed by the enemy, and rendered important service, as he did also at the battles of Glendale and Malvern Hill, his division occupying the right of the main line at both engagements. He was promoted to the rank of major-general of volunteers, 4 July, 1862, engaged in the second battle of Bull Run, at South Mountain, and at Antietam, and in October was assigned to the command of the 12th army corps, hi the battles of Fredericksburg, Chancellorsville, and Gettysburg he took all active part. At Gettysburg he commanded the right wing of the army, and contributed largely to the National victory. Having been transferred with his corps to the west, he served in the Department of the Cumberland till April, 1864, when, his corps being consolidated with the 11th, he was assigned to a division and the command of the district of Vicksburg. In August, 1864, he succeeded General Joseph Hooker in the command of the 20th corps, which was the first body of troops to occupy Atlanta, Georgia, on 2 Sept In Sherman's march to the sea and invasion of the Carolinas, he held command of the left wing of the army, and participated in all its engagements from the departure from Atlanta till the surrender of General Joseph E. Johnston at Durham station, North Carolina In September, 1865, General Slocum resigned from the army and resumed the practice of law in Brooklyn, New York In 1866 he declined the appointment of colonel of infantry in the regular army. In 1865 he was the unsuccessful candidate of the Democrats for secretary of state of New York, in 1868 he was chosen a presidential elector, and he was elected to congress the same year, and reelected in 1870. In 1876 he was elected president of the board of city works, Brooklyn, which post he afterward resigned, and in 1884 he was again elected to congress. He was one of the commissioners of the Brooklyn bridge, and was in favor of making it free to the public.