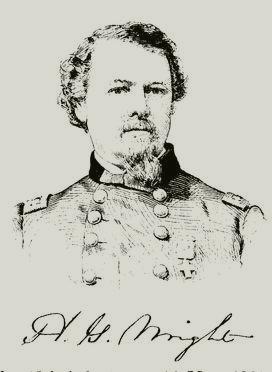 WRIGHT, Horatio Governeur, soldier, born in Clinton, Connecticut, 6 March, 1820. He was graduated second in his class at the United States military academy in 1841, served in the engineer corps, and in 1842-'4 as assistant professor, first of French and then of engineering, at West Point, and was promoted 1st lieu tenant in 1848 After super intending the building efforts and improvements in Florida he became captain in 18;55, and till the civil war was assistant to the chief engineer at Washington, also serving on several special ordnance boards. He de*; dined a major's commission in the 13th infantry on 14 May, 1861, but, after constructing several of the defences of Washington, taking part in the battle of Bull Run as chief engineer of Heintzelman's division, and organizing the Port Royal expedition in the same capacity, he accepted that rank in the engineer corps in August, and on 14 September became brigadier-general of volunteers. He took part in the capture of Hilton Head, South Carolina, in November, led the land forces in the Florida expedition, February-June, 1862, and on 18 July, 1862, became major-general of volunteers. He commanded the Department of the Ohio till 26 March, 1863, the District of Louisville, Kentucky, till April, and then led a division of the Army of the Potomac in the Pennsylvania and Rapidan campaigns, receiving the brevet of lieutenant-colonel for the capture of Rappahannock Station, where he temporarily commanded the 6th corps. After the death of General John Sedgwick, 9 May, 1864, he succeeded to the command of that corps, and on 12 May was brevetted colonel for gallantry at Spottsylvania While at Petersburg he was ordered to the defence of Washington during General Jubal A. Early's invasion of Maryland, in the midsummer of 1864. Great anxiety was felt lest succor from the troops in front of Petersburg should not arrive in time to save the capital, but as Early's advance arrived in the suburbs of Washington on the north, W right's troops were landing at the wharves on the south. With some regiments of the 19th corps just arrived from the Gulf and a few other hastily gathered troops, General Wright was ready to meet any assault. Early was soon forced to withdraw in the face of a strong reconnoissance which General Wright pushed out. "I have sent from here," wrote General Grant to President Lincoln from the Petersburg lines, "a whole corps, commanded by an excellent officer." And to a prominent official of the war department he said" " Boldness is all that is needed to drive the enemy out of Maryland, and Wright is the man to assume that." General Wright rallied the troops under his command, re-formed the line, and did much to retrieve the fortunes of the early surprise at Cedar Creek, 19 October, 1864. His 6th corps first broke the strong lines at Petersburg on Sunday morning, 2 April, 1865. In his official report of that battle General Grant said; " General Wright penetrated the line with his whole corps, sweeping everything before him, and to his left toward Hatcher's Run, capturing many guns and several thousand prisoners." He was brevetted brigadier-general, United States army, 13 March, 1865, for gallantry in the battle of Cold Harbor, and major-general for the capture of Petersburg, Virginia On 14 June, 1865 he received the thanks of the Connecticut legislature. He was made lieutenant-colonel, 23 November, 1865, and then served on various engineering boards, becoming colonel, 4 March, 1879, and chief-of-engineers with the rank of brigadier-general, 30 June, 1879. On 22 March, 1884, he was retired from active service. General Wright is coauthor of a "Report on the Fabrication of Iron for Defences" (Washington, 1871).