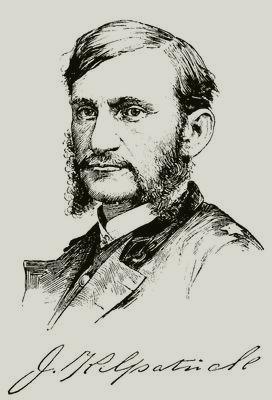 KILPATRICK, Hugh Judson, soldier, born near Deckertown, New Jersey, 14 January, 1836; died in Valparaiso, Chili, 4 December, 1881. He was graduated at the United States military academy in 1861, was appointed captain of volunteers on 9 May, promoted 1st lieutenant of artillery in the regular army oil 14 May, 1861, and was wounded at Big Betheland disabled for several months. In August, 1861, he assisted in raising a regiment of New York cavalry, of which he was made lieutenant colonel. He went to Kansas in January, 1862, in order to accompany General James H. Lane's expedition to Texas as chief of artillery. On the abandonment of the expedition he rejoined his regiment in Virginia, and was engaged in skirmishes near Falmouth, the movement to Thoroughfare Gap, raids on the Virginia Central railroad in July, 1862, various skirmishes in the northern Virginia campaign, and the second battle of Bull Run. In an expedition to Leesburg on 19 September, 1862, he commanded the tawdry brigade. After several months of absence on recruiting service, during which he became colonel, he returned to the field, and commanded a brigade of cavalry in the Rappahannock campaign, being engaged in Stoneman's raid toward Richmond, and in the combat at Beverly Ford. He was promoted brigadier-general of volunteers on 13 June, 1863, and commanded a cavalry division in the latter part of the Pennsylvania campaign. He was in command at the battle of Aldie, and was brevetted for bravery on that occasion. He took part in the battle of Gettysburg, earning there the brevet of lieutenant-colonel in the United States army, and in the subsequent pursuit of the enemy was engaged in constant fighting at Smithsburg, Hagerstown, Boonsborough, and Falling Waters. In the operations in central Virginia, from August till November, 1863, he commanded a cavalry division, and took part in an expedition to destroy the enemy's gunboats " Satellite " and "Reliance" in Rappahannock river, the action at Culpeper on 13 September, and the subsequent skirmish at Somerville Ford, the fights at James City and Brandy Station, and in the movement to Centreville and the action of 19 October at Gainsville. In March, 1864, he was engaged in a raid toward Richmond and through the peninsula, in which he destroyed much property and had many encounters with the enemy, beginning with the action at Ashland on 1 March. In May, 1864, he took part in the invasion of Georgia as commander of a cavalry division of the Army of the Cumberland, and was engaged in the action at Ringgold and in the operations around Dalton until, on 13 May, he was severely wounded at the battle of Resaca. His injuries kept him out of the field till the latter part of July, when he returned to Georgia, and was engaged in guarding the communications of General Sherman's army. and in making raids, which were attended with much severe fighting. He displayed such zeal and confidence in destroying the railroad at Fairburn that Sherman suspended a general movement of the army to enable him to break up the Macon road, in the hope of thus forcing Hood to evacuate Atlanta. Kilpatrick set out on the night of 18 August, 1864, and returned on the 22d with prisoners and a captured gun and battle-flags, having made the circuit of Atlanta, torn up three miles of railroad at Jonesborough, an<] encountered a division of infantry and a brigade of cavalry. In the march to the sea he participated in skirmishes at Walnut Creek, Sylvan Grove, Rocky Creek, and Waynesborough. In the invasion of the Carolinas his division was engaged at Salkehatchie, South Carolina, on 3 February, 1865, near Aiken on 11 February, at Monroe's Cross Roads, North Carolina, on 10 March. near Raleigh on 12 April, at Morristown on 13 April, and in other actions and skirmishes. He was brevetted colonel for bravery at Resaca, promoted captain in the 1st artillery on 30 November, 1864, and on 13 March, 1865, received the brevet of brigadier-general for the capture of Fayetteville, North Carolina, and that of major-general for services throughout the Carolina campaign. He commanded a division of the cavalry corps in the military division of Mississippi from April to June, 1865, was promoted major-general of volunteers on 18 June, 1865, and resigned his volunteer commission on 1 January, 1866. He was a popular general, inspiring confidence in the soldiers under his command, and gained a high reputation as a daring, brilliant, and successful cavalry leader. He resigned his commission in the regular army in 1867. In 1865 he had been appointed minister to Chili by President Johnson, and he was continued in that office by President Grant, but was recalled in 1868. He then devoted himself chiefly to lecturing, and took an active interest in politics as an effective platform speaker on the Republican side. In 1872 he supported Horace Greeley, but returned to his former party in 1876, and in 1880 was an unsuccessful candidate for congress in New Jersey. In March, 1881, President Garfield appointed him again to the post of minister to Chili. During his last diplomatic mission he had a conflict with Stephen A. Hurlbut, United States minister to Peru, and disregarded Sec. Blaine's instructions to interfere in behalf of the Calderon government in the latter country. His remains were brought from Chili for burial in West Point, New York, in October, 1887. See "Kilpatrick and our Cavalry," by John Moore (New York, 1865).