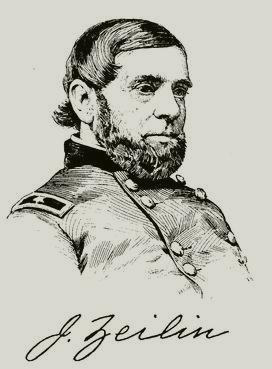 ZEILIN, Jacob, officer of marines, born in Philadelphia, Pennsylvania, 16 July, 1806; died in Washington, D. C., 18 November, 1880. He entered the marine corps and was commissioned a 2d lieutenant, 1 October, 1831, promoted to 1st lieutenant, 12 September, 1836, and cruised in the "Columbus" and "Congress" in 1845-'8 during the Mexican war. He participated in the operations on the Pacific coast and in de fence of Monterey, 15 July, 1846, was transferred to command the marines in the frigate " Congress," and took part with Commander Robert F. Stockton in the conquest of California. He was brevetted major for gallantry in the action at crossing San Gabriel river, 9 January, 1847, and took part in the capture of Los Angeles and in the battle of La Mesa. He was military commandant at San Diego in 1847, and participated in the capture of Guaymas in September. 1847, and in the action at San Jose, 30 September, 1847. During October, 1847, and till the end of the war, he was at Mazatlan, where he tool; part in frequent skirmishes with the Mexicans, who had been obliged to evacuate the city. He was commissioned captain, 14 September, 1847, and served at New York in 1849, and in Norfolk, Virginia, in 1849-'52. He was fleet marine-officer in the flag-ship "Mississippi," in Commander Matthew C. Perry's expedition to Japan in 1852-'4, and commanded the battalion of marines at the landing on 14 July, 1853. He was stationed at Norfolk in 1854-'7, and at Washington in 1857, and there commanded the first; company of marines which quelled the riot of Baltimore roughs, 1 June, 1857. When the civil war began he took command of the right company in the marine battalion in co-operation with the army in 1861, participated in the battle of Bull Run on 21 July, and was slightly wounded, he was commissioned major in the marine corps, 26 July, 1861, was commandant at New York barracks in 18(i2-'3, and in August, 1863, had command of the marine battalion that sailed from New York and landed on Morris island, Charleston harbor, to participate in the operations of the South Atlantic blockading squadron under Admiral Dahlgren. In March, 1864, he returned to the north and took command of the marine barracks at Portsmouth, New Hampshire He was appointed colonel commandant of the marine corps, 10 June, 1864, and assumed control at headquarters at Washington, D. C. He was commissioned brigadier-general commandant, 2 March, 1867. General Zeilin was retired on account of age and long and faithful service, 1 November, 1876.

Start your search on Jacob Zeilin.