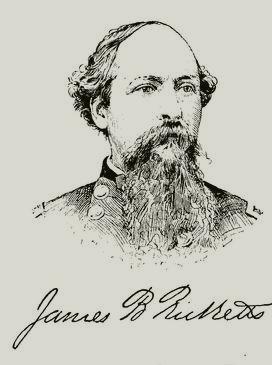 RICKETTS, James Brewerton, soldier, born in New York city, 21 June, 1817" died in Washington, D. C., 22 September, 1887. He was graduated at the United States military academy in 1839, assigned to the 1st artillery, and served during the Canada border disturbances on garrison duty, and in the war with Mexico, taking part in the battle of Monterey, and holding the Rinconada pass during the battle of Buena Vista. He had been made 1st lieutenant, 21 April, 1846, became captain on 3 August 1853, and served in Florida against the Seminole Indians, and subsequently on frontier duty in Texas. At the beginning of the civil war he served in the defence of Washington, D. C., commanded a battery in the capture of Alexandria, Virginia, in 1861, was wounded and captured at Bull Run on 21 July, and on that day was brevetted lieutenant-colonel, and made brigadier-general of United States volunteers, He was confined as a prisoner of war, and afterward was on sick leave of absence until June, 1862, when he engaged in operations in the Shenandoah valley, and participated with the Army of the Potomac in the northern Virginia, the Maryland, and the Richmond campaigns, fighting in all the chief battles. On 1 June, 1863, he became major of the 1st artillery, and he received the brevet of colonel, United States army, for gallant and meritorious services at Cold Harbor, Virginia, 3 June, 1864. He served in the siege of Petersburg, Virginia, in that year in the defence of Maryland against General Jubal Early's raid, and in the Shenandoah campaign, receiving the brevet of major-general of volunteers on 1 August, 1864, for gallant conduct during the war, particularly in the battles of the campaign under General Ulysses S. Grant and General Philip It. Sheridan. He was severely wounded at Cedar Creek, Virginia, 19 October, 1864, and was on sick-leave from that date until 7 April, 1865. On 13 March, 1865, he was brevetted brigadier-genera, l, United States army, for gallant services at Cedar Creek, and major-general, United States army, for gallant and meritorious service in the field. On 28 July, 1865, he was assigned to the command of a district in the Department of Virginia, which post he held until 30 April, 1866, when he was mustered out of the volunteer service. He was appointed lieutenant-colonel, 21st infantry, on 28 July, 1866, but declined this post. He was retired from active service on 3 January, 1867, for disability from wounds received in battle, and served on courts-martial from that date until 22 January, 1869. RICKOFF, Andrew Jackson, educator, born in Mercer county, New Jersey, 23 August, 1824. After receiving his education in Woodward college, Cincinnati, he taught, and has been superintendent of schools in Portsmouth, Cincinnati, and Cleveland, Ohio, and Yonkers, New York The credit is awarded him of reorganizing the schools both of Cincinnati and Cleveland, and largely influencing the school systems in Ohio. The radical changes that he car-tied into effect in organization and methods of instruction have been widely approved by adoption throughout the north and west. The system of schools in Cleveland was commended, by the English commissioners to the International exposition in Philadelphia in 1876, as superior to any other in the United States. At this exposition Mr. Rickoff received a medal as the designer of the best plans for school-buildings. In their report to the government, the French commissioners pronounced these buildings the best in the country. Since 1888 Mr. Rickoff has held charge of Felix Adler's workingman's school, established in 1880. He is the author of many school-books, and has edited a series of six readers, which are extensively used.