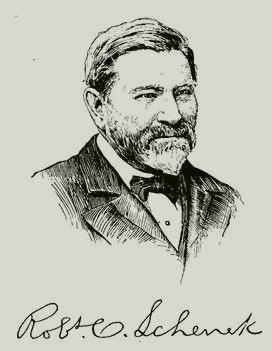 SCHENCK, James Findlay, naval officer, born in Franklin, Ohio, 11 June, 1807; died in Dayton, Ohio, 21 December, 1882. His ancestor, Roelof Martense Schenck, emigrated from Holland to New Amsterdam in 1650. He was appointed to the United States military academy in 1822, but resigned in 1824, and entered the navy as midshipman, 1 March, 1825. He became passed midshipman; 4 June, 1831, and lieutenant, 22 December, 1835, and in August, 1845, joined the " Congress," in which he served as chief military aide to Commander Robert F. Stockton at the capture of Los Angeles, Santa Barbara, and San Pedro, California He also participated in the capture of Guaymas and Mazatlan, Mexico, and in October, 1848, returned home as bearer of despatches. He was commended for efficient services in the Mexican war. Lieutenant Schenck then entered the service of the Pacific mail steamship company and commanded the steamer "Ohio" and other steamers between New York and Aspinwall in 1849-'52. He was commissioned commander, 14 September, 1855, and assigned to the frigate " St. Lawrence," 19 March, 1862, on the West Gulf blockade. On 7 October, 1864, he was ordered to command the "Powhatan" in the North Atlantic squadron, and he also received notification of his promotion to commodore to date from 2 January, 1863. He led the 3d division of the squadron in the two attacks on Fort Fisher, and was highly commended for his services. Commander Schenck had charge of the naval station at Mound City, Illinois, in 1865-'6, was promoted to rear-admiral, 21 September, 1868, and retired by law, 11 June, 1869.--His brother, Robert Cumming, diplomatist, born in Franklin, Ohio, 4 October, 1809, was graduated at Miami university in 1827, and remained as a resident graduate and tutor for three years longer, then studied law with Thomas Corwin, was admitted to the bar, and established himself in practice at Dayton, Ohio. He was a member of the legislature in 1841-'2, displaying practical knowledge and pungent wit in the debates, and was then elected as a Whig to congress, and thrice re-elected, serving from 4 December, 1843, till 3 March, 1851. He was a member of important committees, and during his third term was the chairman of that on roads and canals. On 12 March, 1851, he was commissioned as minister to Brazil. In 1852, with John S. Pendleton, who was accredited to the Argentine Republic as charge d'affaires, he arranged a treaty of friendship and commerce with the government of that country and one for the free navigation of the river La Plata and its great tributaries. They also negotiated treaties with the governments of Uruguay and Paraguay. He left Rio Janeiro on 8 October, 1853, and after his return to Ohio engaged in the railroad business. He offered hisser-vices to the government when the civil war began, and was one of the first brigadier-generals appointed by President Lincoln, his commission bearing the date of 17 May, 1861. He was attached to the military department of Washington, and on 17 June moved forward by railroad with a regiment to dislodge the Confederates at Vienna, but was surprised by a masked battery, and forced to retreat. On meeting re-enforcements, he changed front, and the enemy retired. His brigade formed a part of General Daniel Tyler's division at the first Bull Run battle, and was on the point of crossing the Stone Bridge to make secure the occupation of the plateau, when the arrival of Confederate re-enforcements turned the tide of battle. He next served in West Virginia tinder General William S. Rosecrans, and was ordered to the Shenandoah valley with the force that was sent to oppose Gem Thomas J. Jackson. Pushing forward by a forced march to the relief of General Robert H. Milroy, he had a sharp and brilliant engagement with the enemy at McDowell. At Cross Keys he led the Ohio troops in a charge on the right, and maintained the ground that he won until he was ordered to retire. General John C. Fremont then intrusted him with the command of a division. At the second battle of Bull Run he led the first division of General Franz Sigel's corps. He was wounded in that action by a musket-ball, which shattered his right arm, incapacitating him for active service till 16 December, 1862, when he took command of the middle department and eighth corps at Baltimore, having been promoted major-general on 18 September After performing effective services in the Gettysburg campaign, he resigned his commission on 3 December, 1863, in order to take his place in the house of representatives, in which he served as chairman of the committee on military affairs. He was re-elected in 1864, and was placed at the head of the same committee, where he procured the establishment of the National military and naval asylum. In 1865 he was president of the board of visitors to the United States military academy, and was one of the committee of congress on the death of President Lincoln, serving also on the committee on retrenchment. In 1866 he attended the Loyalists' convention at Philadelphia and the soldiers' convention at Pittsburg, Pennsylvania He was re-elected to congress in 1866 and in 1868, when his opponent was Clement L. Vallandigham, serving as chairman of the committee of ways and means and of the ordnance committee. On 22 December, 1870, he received the appointment of minister to Great Britain. In 1871 he was one of the "Alabama" commission. He resigned his post in 1876 in consequence of the failure of the Emma silver-mine company, in which he had permitted himself to be chosen a director, and resumed the practice of law in Washington, D. C.