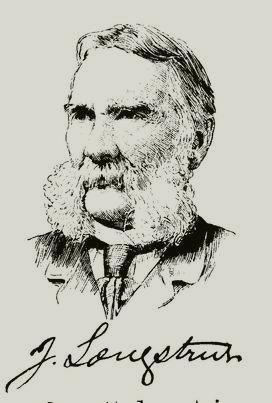 LONGSTREET, James, soldier, born in Edge-field district, South Carolina, 8 January, 1821. He removed with his mother to Alabama in 1831, and was appointed from that state to the United States military academy, where he was graduated in 1842, and assigned to the 4th infantry. He served at Jefferson Barracks, Missouri, in 1842-'4, on frontier duty at Natchitoches, Louisiana, in 1844-'5, in the military occupation of Texas in 1845-'6, and in the war with Mexico, being engaged in the battles of Palo Alto, Resaca de la Palma, Monterey, the siege of Vera Cruz, Cerro Gordo, San Antonio, Churubusco, and Moleno del Rey. For gallant and meritorious conduct in the two latter battles he was brevetted captain and major, and he had previously been promoted 1st lieutenant, 23 February, 1847. At the storming of Chapultepec, 8 September, 1847, he was severely wounded in the assault on the fortified convent. He served as adjutant, 8th infantry, from 8 June, 1847, till 1 July, 1849, and on frontier and garrison duty, chiefly in Texas, till 1858, being made captain, 7 December, 1852. He became paymaster, 19 July, 1858, and resigned, 1 June, 1861. He was commissioned brigadier-general in the Confederate service, and at the first battle of Bull Run commanded a brigade on the right of the Confederate line, where he held a large force of the National army from operating in support of McDowell's flank attack. On General Joseph E. Johnston's retreat before McClellan at Yorktown, Longstreet commanded the rear-guard, having been made a major-general. On 5 May, 1862, he made a stand at Williamsburg, and was at once attacked by Heintzehnan, Hooker, and Kearny. He held his ground until his opponents were re-enforced by Hancock, when he was driven back into his works. He took part in the seven days' battles around Richmond, and at the second battle of Bull Run, when in command of the 1st corps of the Army of Northern Virginia, came to the relief of Jackson, when he was hard pressed by Pope's army, and by a determined charge in flank decided the fortunes of the day. At Fredericksburg he held the Confederate left. In 1863 he was detached with two of his divisions for service south of James river. On Hooker's movement, which led to the battle of Chancellorsville, Longstreet was ordered to rejoin the army of Lee, but did not arrive in time to participate in the battle. He commanded the right wing of the Army of Northern Virginia at the battle of Gettysburg, and tried to dissuade Lee from ordering the disastrous charge on the third day. When Lee retreated to Virginia, Longstreet, with five brigades, was transferred to the Army of Tennessee under Bragg, and at the battle of Chickamauga held the left wing of the Confederate army. He was then detached to capture Knoxville, but found it too strongly fortified to be taken by assault. Early in 1864 he rejoined Lee, and was wounded by the fire of his own troops in the battle of the Wilderness. He commanded the 1st corps of the Army of Northern Virginia in all the operations in 1864, and was included in the surrender at Appomattox, 9 April, 1865. He was known in the army as "Old Pete," and was considered the hardest fighter in the Confederate service. He had the unbounded confidence of his troops, who were devoted to him, and the whole army felt better when in the presence of the enemy it was passed along the line that "Old Pete was up." After the war General Longstreet established his residence in New Orleans, where he engaged in commercial business in the firm of Longstreet, Owens and Company. He was appointed surveyor of customs of the port of New Orleans by President Grant, supervisor of internal revenue in Louisiana, postmaster at New Orleans, and minister from the United States to Turkey by President Hayes, and United States marshal for the district of Georgia by President Garfield.

Start your search on James Longstreet.