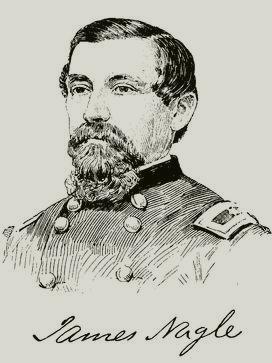 NAGLE, James, soldier, born in Reading, Pennsylvania, 5 April, 1822; died in Pottsville, Pennsylvania, 22 August, 1866. In 1842 he organized the Washington artillery company, and, when war was declared against Mexico, he enlisted with it as the 1st Pennsylvania volunteers. His regiment was stationed at Perote I castle to keep open the communication with Vera Cruz during its siege. He assisted in routing a force of guerillas at La Hoya, fought at Huamantla, Puebla, Atlixco, entered the city of Mexico, and was finally stationed at San Angel until the close of the war. He was mustered out of service with his company at Philadelphia on 27 July, 1848, and the inhabitants of Schuylkill county, Pennsylvania, presented him with a sword. In 1861 he was commissioned colonel of the 6th Pennsylvania regiment, and in that year organized the 48th Pennsylvania, of which he was made colonel. He served at Fort Monroe, Hatteras island, and Newbern, and commanded a brigade in the 9th army corps in the second battle of Bull Run. He was appointed brigadier-general of volunteers on 10 September, 1862, and at Antietam his brigade performed an important part in carrying Antietam bridge, which, according to Gem McClellan, saved the day. His appointment expired oil 4 March, 1863, but was renewed on 13 March, and he served with his brigade in Kentucky until 9 May, when he resigned, owing to impaired health. When General Lee invaded Pennsylvania in June, 1863, General Nagle organized the 39th regiment of Pennsylvania militia, was commissioned its colonel, and commanded a brigade, but was mustered out on 2 August, 1863. In 1864 he organized the 149th Pennsylvania regiment for 100 days' service, became its colonel, and guarded the approaches to Baltimore until the expiration of his service.

Start your search on James Nagle.