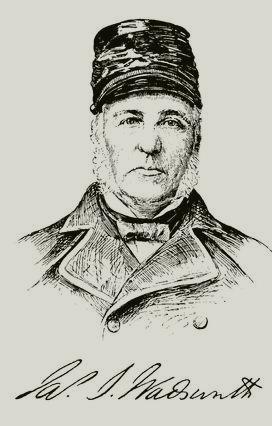 WADSWORTH, James, soldier, born in Durham, Connecticut, 6 July, 1730; died there, 22 September, 1817. He was graduated at Yale in 1748. From 1756 till 1786 he was town-clerk of Durham, and at the beginning of the Revolution he became a member of the committee of safety. In 1776 he was colonel and brigadier-general of Connecticut militia, and in 1777 he was appointed 2d major-general. In the latter year he was ordered to New Haven to defend the towns on the coast. Subsequently he was a justice, and afterward presiding justice of the New Haven county court of common pleas, was a delegate from Connecticut to the Continental congress in 1783-'6, and from 1785 till 1790 a member of the executive council.--His nephew, James, philanthropist, born in Durham, Connecticut, 20 April, 1768; died in Geneseo, New York, 8 June, 1844, was graduated at Yale in 1787, and in 1790 removed with his brother, William, to Genesee river, purchasing a large tract of land in what is now the town of Geneseo, and becoming one of the most wealthy land-proprietors in the state. At his personal expense he printed and circulated publications on education, employed lecturers on this subject, and offered premiums to the towns that should be the first to establish libraries. In 1811 he proposed the establishment of normal schools, and in 1838 he procured the enactment of a school-library law, and founded a library and institution for scientific lectures at Geneseo, which he endowed with $10,000. In his sales of land he always stipulated that a tract of 125 acres in each township should be granted free for a church, and another of the same size for a school.--James's brother, William, soldier, born in Durham, Connecticut, in 1732; died in Geneseo, New York, in February, 1833, was also an early settler in western New York. At the beginning of the war of 1812 he was brigadier-general of New York militia, and he served in the United States army from 26 June till 15 November, 1812, took part in the assault on Queenston Heights, 13 October, 1812, where he was in command when the Americans surrendered, and gave up his sword in person to Sir Roger Sheaffe. --James's son, James Samuel, soldier, born in Geneseo, New York, 30 October, 1807; died near Chancellorsville, Virginia, 8 May, 1864, was educated at Harvard and Yale and studied law in Albany, completing his course with Daniel Webster. Although he was admitted to the bar in 1833, he never practised his profession, but devoted himself to the management of the family estate in western New York, which , , amounted to 15,00 1852 he was elected president of the State agricultural society, in which he was interested during his life. He promoted education and the interests of the community in which he lived. He founded a public library in Geneseo, was a subscriber to the endowment of Geneseo college, aided in establishing the school-district library system, and was active in philanthropical labors. Although a Federalist by education and a Democrat by conviction, he supported the Free-soil party in 1848, and continued to act in defence of the anti-slavery move-meat. He was a presidential elector on the Republican ticket in 1856 and 1860. In 1861 he was a delegate to the Peace convention in Washington, and at the beginning of the civil war he was among the first to offer his services to the government. In April, 1861, he was commissioned a major-general by Governor Edwin D. Morgan, but the appointment was subsequently revoked. When communication with the capital was cut off, he chartered two ships upon his own responsibility, loaded them with provisions, and went with them to Annapolis, where he superintended the delivery of the supplies. He was volunteer aide to General Irvin Mc-Dowell at the first battle of Bull Run, where he was commended for bravery and humanity. Afterward he was made brigadier-general of volunteers, 9 August, 1861, assigned to a command in the advance under General George B. McClellan, and guarded the city of Washington. On 15 March, 1862, he became military governor of the District of Columbia. In the autumn of 1862 he was the Republican candidate for governor of New York, but was defeated by Horatio Seymour. In the following December he was assigned to the command of a division in the Army of the Potomac under General Ambrose E. Burnside, and participated in the battle of Fredericksburg, 13 December, 1862. He displayed great military skill in the command of the 1st division of the 1st army corps under General John F. Reynolds. At Gettysburg his division was the first to engage the enemy on 1 July, 1863, and on that day lost 2,400 out of 4,000 men. During the second and third days' fighting he rendered good service in maintaining the heights on the right of the line. At the council of war held after the victory he was one of the three that favored pursuit of the enemy. Early in 1864 he was sent on special service to the Mississippi valley, and made an extensive tour of inspection through the southern and western states. On the reorganization of the Army of the Potomac in 1864, he was assigned to the command of the 4th division of the 5th corps, composed in part of his old command. While endeavoring to rally his troops during the battle of the Wilderness, 6 May, 1864, he was struck in the head by a bullet, and before he could be removed the enemy had gained possession of the ground where he lay. Although unconscious, he lingered for two days. It is said that his troops were inspired by his heroic bearing continually to renew the contest, when but for him they would have yielded. He was brevetted major-general of volunteers on 6 May, 1864. Horace Greeley, in his "American Conflict" (Hartford, 1864-'6), says : "The country's salvation claimed no nobler sacrifice than that of James S. Wadsworth, of New York.... No one surrendered more for his country's sake, or gave his life more joyfully for her deliverance." In 1888 a movement was in progress for the erection in Washington of a monument to his memory.

Start your search on James Wadsworth.