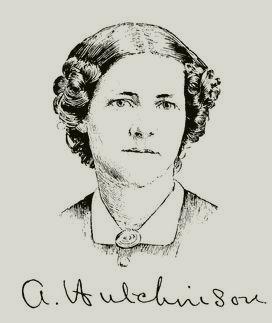 HUTCHINSON, Jesse, farmer, born in Middleton, Massachusetts, 3 February, 1778; died in Milford, New Hampshire, 16 February, 1851. His ancestor, Richard, came to this country from England in 1634. acquired much land in Salem, Massachusetts, and was paid a premium by the state for "setting up" the first plough in Massachusetts, he married Mary Leavitt, of Mount Vernon, New Hampshire, in 1800, and resided on a farm in Milford for several years. They occasionally sang in chorus, taking parts in the quartets of ballads and sacred music, and were the parents of the "Hutchinson family," who achieved a reputation as popular singers, and were identified with the anti-slavery and temperance movements. The religious sentiment of New England was noticeable in their productions and repertory. The family became abolitionists when it required courage to face political prejudice, and some of them were excommunicated from the Baptist church on this account. The children numbered sixteen, three of whom died in infancy. All inherited musical talent, and people came from far and near to hear them sing in chorus in prayer meetings, or at home. They were often urged to appear in public, and in the summer of 1841 the four youngest children, Judson, John, Asa, and Abby, made a successful concert-tour in New England. In 1843 the family appeared in New York city, and achieved an immediate success. N.P. Willis spoke of them as a "nest of brothers with a sister in it." They accompanied themselves with a violin and violoncello, and excelled in sacred and descriptive songs, and in ballads, both humorous and pathetic. Their own productions were received with most enthusiasm by the popular taste, although their melodies were simple and crudely harmonized. They were co-workers with Garrison, Greeley, Rogers, and other leaders of anti-slavery reform, often aiding in mass conventions, singing popular and original songs with their quartet chorus. In 1845 they travelled in Great Britain and Ireland, and met with popular success. They travelled from the Atlantic to the Pacific in the political canvasses of 1856 and 1860, forming several bands from a third generation in their family. During the civil war some of these bands visited recruiting stations to encourage volunteer enlistments, and after the battle of Bull Run they went to Virginia, where they were expelled from the National lines by General McClellan because they sang Whittier's "Ein Feste Burg" as an anti-slavery song. Appeal was made to President Lincoln, who said, after Sec. Chase read the obnoxious song in a cabinet meeting: "It is just the character of song that I desire the soldiers to hear." By the unanimous consent of the cabinet and the order of President Lincoln, they were re-admitted to the National camps.-The eldest son, Jesse, wrote many songs for popular airs, which he sang with effect. The principal of these were the "Emancipation Song," "Family Song," "Old Granite State," "Good Old Days of Yore," "The Slave Mother," "The Slave's Appeal," "Good Time Coming," and "Uncle Sam's Farm." It was he that organized the company.--Judson was the humorist, excelling in burlesque and political songs, some of which were an Italian burlesque, "The Bachelor's Lament," "Away Down East," "The Modern Belle," "Anti-Caloreel," "Jordan," and "The Humbugged Husband."--Asa was the basso, and the executive member of the troupe.--John, born in Milford, New Hampshire, 4 January, 1821, possessed the most vocal talent. Among his songs and those of his son Henry were "Will the New Year come Tonight, Mother?," "Bingen on the Rhine," "The Newfoundland Doe," "The Bridge of Sighs," "The People's Advent," and Russell's "Ship on Fire."--Abby, the contralto, born in Milford, New Hampshire, 29 August, 1829, began at an early age to sing with her brothers. She was admired for her simplicity and archness, and sang " Over the Mountain and over the Moor," "The Slave's Appeal," " The Spider and the Fly," "Jamie's on the Stormy Sea," and " The May Queen." She married Ludlow Patton, of New York city, in 1849, and has since lived in retirement, the brothers continued to appear in concerts, and from time to time have brought before the public their own families of young singers. They were followed by many bands of imitators.

Start your search on Jesse Hutchinson.