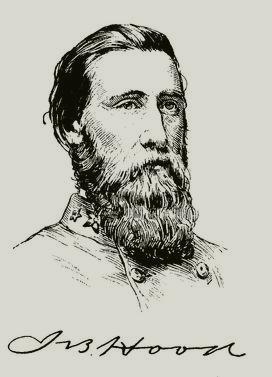 HOOD, John Bell, soldier, born in Owenville, Bath County, Kentucky, 1 June, 1831; died in New Orleans, Louisiana, 30 August, 1879. He was graduated at the United States military academy in 1853, and, after serving two years in California, was transferred in 1855 to the 2d cavalry, of which Albert Sidney Johnston was colonel and Robert E. Lee lieutenant-colonel. In the fight at Devil's Run with the Comanche and Lipian Indians, in July, 1857, he was severely wounded in a hand-to-hand encounter with a savage. He was promoted 1st lieutenant in 1858, and was cavalry instructor at the military academy in 1859-'60. At the beginning of the civil war he resigned his commission, and, entering the Confederate army, rose to the rank of colonel, and, after a short service in the peninsula, was appointed brigadier-general of the Texas brigade. He was then ordered back to the peninsula, was engaged at West Point, and, while leading his men on foot at Gaines's Mill, was shot in the body. In this battle his brigade lost more than half its number, and Hood was brevetted major-general on the field. He served in both Maryland campaigns, was engaged in the second battle of Bull Run and those of Boonesborough, Fredericksburg, and Antietam, and was a second time severely wounded at Gettysburg, losing the use of his arm. Two months later he re-joined his command, and was ordered to Tennessee to re-enforce General Braxton Bragg. During the second day's fight at Chickamauga, seeing the line of his brigade waver, he rode to the front, and demanded the colors. The Texans rallied and charged, and Hood, at the head of the column, was again shot down. This wound necessitated the loss of his right leg, and while in hospital he was offered a civil appointment, which he refused, saying: "No bomb-proof place for me; I propose to see this fight out in the field." Six months later he returned to duty, and in the spring of 1864 commanded a corps in General Joseph E. Johnston's army, fighting through the retreat from Dalton to Atlanta. In obedience to an order of Jefferson Davis he succeeded Johnston in the command on 8 July, 1864, and, after several days of stubborn fighting, was completely outflanked by General William T. Sherman, and compelled to evacuate Atlanta, leaving Sherman in the rear, and enabling him to make his march to the sea. Hood then began a counter-movement into Tennessee. He compelled the evacuation of Decatur in November, crossed the Tennessee, and on the 30th of this month was defeated by General George H. Thomas at Franklin. On 16 December he was again disastrously defeated at Nashville by the same general, and after this battle, at his own request, was relieved of command and succeeded by General Richard Taylor. On the termination of the war he engaged in business as a commission-merchant in New Orleans, and was also president of the Louisiana branch of the Life association of America, acquiring a competency, which was afterward lost in trade. During the yellow-fever epidemic of 1879 his wife and eldest child died within a few hours of each other, and Hood also succumbed to the disease. He is the author of "Advance and Retreat, Personal Experiences in the United States and Confederate Armies" (New Orleans, 1880).