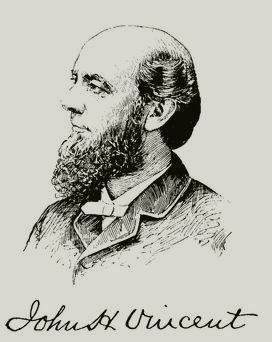 VINCENT, John Heyl, M. E. bishop, born in Tuscaloosa, Alabama, 23 February 1832. He was educated at academies in Milton and Lewisburg, Pennsylvania, began to preach at the age of eighteen, completed his training for the ministry at Wesleyan institute, Newark, New Jersey, and in the four years' theological course of the New Jersey conference, into which he was received in 1853. He was ordained deacon in 1855 and elder in 1857, when he was transferred to the Rock River conference, serving as pastor in Chicago, Galena, and elsewhere till 1865. In that year he established the "Northwest Sunday-School Quarterly," and in 1866 the "Sunday-School Teacher." He was appointed general agent of the Methodist Episcopal Sunday-school union, and in 1868 was elected by the general conference corresponding secretary both of the union and of the tract society, in which posts he was continued till 1884. He was the editor of the Sunday-school publications of his denomination, conducting the "Sunday-School Journal," published in New York city, with such success that its circulation rose from 16,500 to 160,000, while that of his lesson-books has been nearly 2,500,000 copies. In 1873, with Lewis Miller, of Akron, Ohio, he projected a Sun-day-school teachers' institute for the purpose of preparing teachers for their work by means of lectures and drills. The institute first met at Chautauqua, New York, in August, 1874, and has since assembled each year in the same place. It has extended beyond the limits of its original design, and given rise to allied institutions, which, as well as the Sunday-school assemblies and the international lessons, extend their benefits to members of all Christian bodies. The Chautauqua literary and scientific circle, which prescribes courses of reading for all classes of people, was founded in 1878, and within a few years had 100,000 students on its rolls. In connection with this the Chautauqua university was established, a summer school in which lectures on most of the arts and sciences are given, and of which Dr. Vincent, who received the degree of D. D. from Ohio Wesleyan university in 1870, and that of LL. D. from Washington and Jefferson in 1885, has been chancellor from the beginning. At the general conference of 1888 he was elected a bishop. Among his published works are "Little Footprints in Bible Lands" (New York, 1861); "The Chautauqua Movement" (1886)" "The Home Book" (1886)" " The Modern Sunday-School" (1887); and "Better Not" (1887).--His cousin, Strong, soldier, born in Waterford, Erie County, Pennsylvania, 17 June, 1837; died near Gettysburg, Pennsylvania, 7 July, 1863, after passing through Erie academy and working for two years in his father's iron-foundry, entered the scientific school at Hartford, Connecticut, next became a student of Trinity college, and, leaving that, was graduated at Harvard in 1859. He then studied law, was admitted to the bar in 1860, and began practice in Erie. When the civil war began he enlisted as a private for three months in the volunteer army, was chosen 2d lieutenant, and soon afterward was appointed adjutant. He re-enlisted for three years, was made major, and promoted lieutenant-colonel of the 83d Pennsylvania infantry in September, 1861. He was engaged in the construction of siege-works at Yorktown, and soon after the battle of Hanover Court-House was prostrated with swamp fever. He returned to his regiment in October, 1862, as its colonel, and at Fredericksburg temporarily commanded a brigade in a difficult retreat. He declined the appointment of judge-advocate of the Army of the Potomac, in April, 1863, took command of his brigade as ranking colonel, and effectively supported General Alfred Pleasonton's cavalry at Aldie. At Gettysburg, orders having come from the front from General George Sykes, at the suggestion of General Gouverneur K. Warren, for a brigade to occupy Little Round Top, Vincent, in the absence of the division commander, assumed the responsibility of taking up his own brigade. On reaching the hill, he quickly selected a position, posting his men on the left-hand crest of Little Round Top, and in the hollow between it and Round Top, where the Confederates made their first attempt to ascend the ravine and turn the left flank of the National army, in withstanding which his force was supported by the command of General Stephen H. Weed and the battery of Captain Charles E. Hazlett on the middle crest of Little Round Top, and by the regiment of Colonel Patrick H. O'Rorke, which was sent up by General Warren just in time to frustrate the flank movement of the enemy. Vincent was shot while cheering on this regiment as it faltered before the fire of the Confederate infantry.--Strong's brother, Boyd, P. E. bishop, born in Erie, Pennsylvania, 18 May, 1845, was graduated at Yale in 1867, studied theology, and after serving in 1871-'2 as assistant minister of St. Paul's Protestant Episcopal church in Erie, Pennsylvania, became rector of a new church in that town, which he left in 1874 to assume charge of Calvary church in Pittsburg, Pennsylvania He was elected bishop of Delaware in 1887 by the clergy, but was not confirmed by the laity, and in October, 1888, was chosen assistant bishop of southern Ohio.