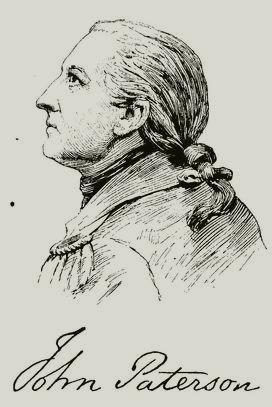 PATERSON, John, soldier, born in New Britain, Connecticut, in 1744; died in Lisle, now Whitney's Point, New York, 19 July, 1808. He was graduated at Yale in 1762, taught, practised law, and was a justice of the peace at New Britain, Connecticut He settled in 1774 at Lenox, Massachusetts, and was a member of the first Provincial congress, which met at Salem in October, 1774, and of the next congress at Cambridge in February, 1775. He enrolled in Berkshire county a regiment of minute-men, which marched for Boston, armed and mostly in uniform, eighteen hours after the arrival of the intelligenee of the battle of Lexington, and, when they reached that place, constructed the first redoubt on the American line at Charlestown. This they defended on the day of the battle of Bunker Hill from a British attack in the rear of the American position. After the British troops evacuated Boston, in March, 1776, Col Paterson's Berkshire regiment was ordered to New York, and thence to Canada for the purpose of reenforcing General Benedict Arnold. Some of them were engaged in the disastrous battle of the Cedars, and seventy-nine were there taken prisoners. Retreating from Canada, they passed through Crown Point, fortified Mount Independence, and remained there till November, 1776, marched thence to Albany, and joined Washington's forces at Newt own, Pennsylvania, with only 220 men remaining of the 600 that left New York. Paterson was recommended to congress by General Horatio Gates on 30 September, 1776. Ills regiment participated in the battles of Trenton and Princeton. He was made a brigadier-general on 21 February, 1777, and was attached to the northern department. He performed efficient service at the battle of Stillwater and in the defeat of General John Burgoyne. He also took part in the battle of Monmouth, and was not mustered out till after the end of the war. In September, 1783, he became major-general. During Daniel Shays's rebellion in 1786 he commanded a detachment of Berkshire militia that was ordered out to suppress the rising. Afterward he removed to Lisle, and was first presiding judge of Broome county. He was a member of the New York assembly in 1792, and of the Constitutional convention of 1801, and a member of congress from 17 October, 1803, till 3 March, 1805. His last years were spent on his farm.

Start your search on John Paterson.