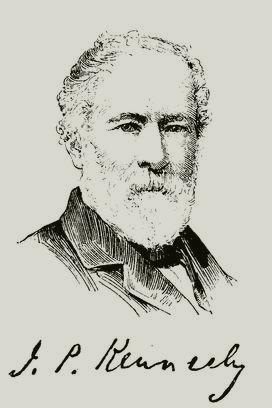 KENNEDY, John Pendleton, author, born in Baltimore, Maryland, 25 October, 1795; died in Newport, Rhode Island, 18 August, 1870. He was graduated at Baltimore college (now University of Maryland) in 1812, and in 1814 fought at Bladensburg and North Point. Subsequently he studied law, and was admitted to, the bar in 1816. He was elected to the Maryland house of delegates in 1820, and re-chosen the two years following. In 1823 he was appointed secretary of legation to Chili, but withdrew his acceptance before the mission sailed. He was a warm advocate of the administration of John Quincy Adams, and wrote diligently in its support, strenuously opposing the extension of slavery. He also wrote a review (Baltimore, 1830) of Churchill C. Cambreleng's report on commerce and navigation, combating its anti-protective arguments. This was widely circulated, and the following year Kennedy was sent as a delegate to the National convention of the Friends of manufacturing industry, and was one of the committee appointed to draft an address setting forth the protectionist view. In 1838 he was elected to congress, and in 1840 he was one of the electors on the Harrison ticket. In the latter year he was again sent to congress, and appointed chairman of the committee on commerce, in which capacity he drew up a report upon the reciprocity treaties and their effects on the shipping interest of the country. On President Tyler's abandonment of the Whigs, Mr. Kennedy was selected, at a meeting of the members of that party in both houses of congress, to draft a "manifesto" condemning the course of the chief magistrate. In 1842 he was once more returned to congress. At the next election he was defeated by a small vote, but in 1846 was elected to the Maryland house of delegates, and made speaker. In 1852 Mr. Kennedy was appointed secretary of the navy, and it was mainly to his efforts that the success of Commander Perry's Japan expedition and of Dr. Kane's second arctic voyage was due. On the accession of Franklin Pierce to the presidency, Mr. Kennedy retired finally from politics. At the beginning of the civil war he warmly espoused the national cause, and at its close advocated the election of General Grant. After the war he made three visits to Europe, chiefly with the view of benefiting his health, but without success, as his death occurred soon after his return. While he was abroad he became a friend of William M. Thackeray. On one occasion, in Paris, when "The Virginians " was in course of publication in monthly numbers in London, Thackeray spoke of his disinclination to supply the printer with " copy" for the next chapter, and said, jestingly, " I wish you would write one for me." "Well," said Kennedy, "so I will, if you will give me the run of the story." The result was that Kennedy wrote the fourth chapter of the second volume of " The Virginians," which accounts for the accuracy of the descriptions of the local scenery about Cumberland, with which Kennedy was familiar, and which Thackeray had never seen. During the last of his sojourns abroad he acted, in 1867, as United States commissioner to the Paris exhibition. He took great interest in the Peabody institute in Baltimore, and the donor largely availed himself of his advice in its organization. Mr. Kennedy also bequeathed to the institute his library and papers. He received the degree of LB. D. from Harvard in 1863. In 1818-'19 he issued in Baltimore, with Peter H. Cruse, "The Red Book," a fortnightly satirical publication. His novels are "Swallow Barn," a story of rural life in Virginia (Philadelphia, 1832); "Horse-Shoe Robinson, a Tale of the Tory Ascendency" (1835): and "Rob of the Bowl, a Legend of St. Inigoes," describing the province of Maryland in the days of the second Lord Baltimore (Philadelphia, 1838). the three were afterward issued in a new illustrated edition (New York, 1852). His other works include: "Annals of Quodlibet," a political satire (1840), and "Memoirs of the Life of William Wirt" (2 vols., Philadelphia, 1849; 2d ed., revised, 1850). By his will Mr. Kennedy provided for the publication of a uniform edition of his entire works, which has since appeared (10 vols., New York, 1870). Among his various speeches, reports, addresses, etc., that have been printed are "Address before the Baltimore Horticultural Society" (1833); "A Discourse on the Life and Character of William Wirt" (Baltimore, 1834)" "A Discourse at the Dedication of Green Mount Cemetery" (1839): "A De-fence of the Whigs" (1844)" and "Discourse o51 the Life and Character of George Calvert, the First Lord Baltimore" (Baltimore, 1845). The complete edition of his works also contains "3Ir. Ambrose's Letters on the Rebellion" (New York, 1865), and "At. Home and Abroad, a Series of Essays, with a Journal in Europe in 1867-'8" (1872). See his life by Henry T. Tuckerman (New York, 1871), and " Tribute to the Memory of Hon. John Pendleton Kennedy," delivered by Robert C. Winthrop, 8 September, 1870.--His brother, Anthony, senator, born in Baltimore, Maryland, 21 December, 1811, removed with his parents to Charlestown, Virginia, in 1821, received a classical education, studied law, and was admitted to the bar. He never practised his profession, but subsequently became a cotton-grower and manufacturer. From 1839 till 1843 he was a member of the Virginia legislature, and in 1847 the Whig candidate for congress. In 1850 he refused the consul-generalship to Cuba, and in 1851, after marrying for his second wife, Margaret, daughter of Christopher Hughes, removed to Baltimore, where he was elected to the United States senate, serving from 12 May, 1858, till 3 March, 1863. In the convention of 1867 he took an active part in framing the present constitution of Maryland.