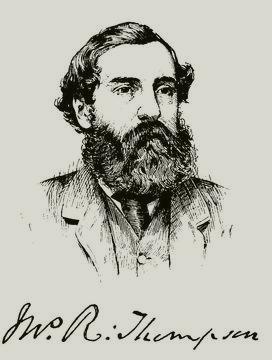 THOMPSON, John Reuben, author, born in Richmond, Virginia, 23 October, 1823; died in New York city, 30 April, 1873. He was graduated at the University of Virginia in 1844, afterward studied law there, and settled in Richmond, with every prospect of success in his profession. But he had always been a lover of literature and a keen student of it, and these proclivities became more dominating after he had completed his education. Accordingly, in 1847, he accepted the editorship of the "Southern Literary Messenger." This magazine was a power in its day, and did no little to foster a literary spirit among the younger race of southern men. Mr. Thompson brought a great deal of zeal and energy into the editorial chair, and during the twelve years in which he successfully carried forward his literary work in connection with this monthly he imparted to it such a character as no southern magazine has ever had before or since. He did much to bring southern talent to light, and in the pages of the " Southern Messenger" Donald G. Mitchell first published his " Reveries of a Bachelor" and " Dream Life." Here too appeared the early writings of John Esten Cooke, Philip Pendleton Cooke, Paul H. Hayne, and Henry Timrod. In 1854 Mr. Thompson went to Europe in search of health. During this absence he wrote papers for the " Southern Messenger," which long afterward he collected in book-form. One copy had been sent to the author, and the edition, except this, was burned in the publishing-house, His health continued so delicate that in 1859 he resigned his editorship in Richmond and went to Augusta, Georgia, where he edited the "Southern Field and Fireside." In 1863 he went abroad again in such delicate health that his friends did not expect him to reach the farther shore alive ; but the sea-voyage revived him, and he rapidly improved. He chose London as his residence, where he was regularly engaged on the staff of the " London Index," and contributed to " Blackwood's Magazine." Some time after the civil war he returned home in broken health and dispirited. Finding it impossible to do anything in the way of literature in the south, he became literary editor of the " New York Evening Post," continuing as such for several years, until his health failed again. He made a last effort to restore it by going to Colorado in 1872, where he spent the winter, returning in the spring, only to die. Mr Thompson was a polished and graceful writer, both of prose and verse, but he did his most effective work as a literary editor. Many of his lyrics are household words in the south, especially in his native state, and his influence in fostering the talents of writers that have since distinguished themselves was decided. He was greatly beloved for his genial and refined nature. Among his most admired poems are "The Burial of Latane," "The Death of Stuart," and " The Battle Rainbow."