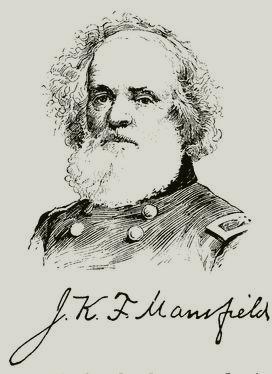 MANSFIELD, Joseph King Fenno, soldier, born in New Haven, Connecticut, 22 December, 1803; died near Sharpsburg, Maryland, 18 September, 1862. He was appointed to the United States military academy, where during part of the fourth year he acted as assistant professor of natural philosophy, and was graduated in 1822, standing second in a class of forty. He was assigned to the engineer corps, and for the next three years was an assistant to the board of engineers, then assembled in New York and engaged in planning fortifications for the defence of the harbors and cities on the coast. In 1832 he was promoted 1st lieutenant, and on 7 July, 1838, he was appointed captain. He served in the Mexican war as chief engineer under General Taylor, was brevetted major for gallant and distinguished services in the de fence of Fort Brown, Texas, which he built, in 1846, and the following September was brevetted lieutenant-colonel for gallant and meritorious conduct in the engagements at Monterey, where he received seven severe wounds. In 1847 he was brevetted colonel for meritorious services at Buena Vista. On 28 May, 1853, he was appointed inspector-general of the United States army, with the rank of colonel, and in May, 1861, he was commissioned brigadier-general of volunteers and placed in command of the Department of Washington. He fortified the city on every side and crowned the heights of Arlington with earthworks. On the return of General Wool to Fortress Monroe he was sent to Hatteras and afterward to Ca, rap Hamilton and Newport News. On 10 Ma, y he marched with a division to the attack on Norfolk, and, after the capture of that place, was assigned to the command of Suffolk, Virginia, where he acted as military governor. After the second battle of Bull Run he was summoned to the court of inquiry at, Washington, and during the delay, becoming impatient for active duty, he was assigned to the command of the corps formerly under General Nathaniel P. Banks. At the battle of Antietam he fell mortally wounded early in the day while cheering on his troops in a charge. On the 18th of the previous July he had been pro-rooted major-general of volunteers.