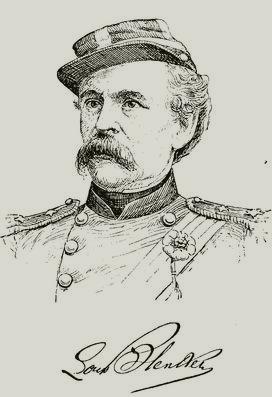 BLENKER, Louis, soldier, born in Worms, Hesse Darmstadt, Germany, 31 July 1812; died in Rockland County, New York, 31 October 1863. In his youth he was apprenticed to a jeweler, but on becoming of age he enlisted in the Bavarian legion that was raised to accompany Prince Otho, then recently elected king, to Greece. When the legion was disbanded m 1837, he received the rank of lieutenant. He then returned home and began the study of medicine in the University of Munich, but soon gave this up to engage in the wine business in Worms. In 1849 he was a leading member of the revolutionary government in that City, and also burgomaster and commander of the national guard. He fought in several successful engagements with the Prussians ; but the revolutionists being soon completely crushed, he retired into Switzerland. In September 1849, having been ordered to leave that country, he came to the United States and settled in Rockland County, New York, where he undertook to cultivate a farm. Later he engaged in business in New York, and so continued until the beginning of the civil war, when he organized the 8th regiment of New York volunteers, of which he was commissioned colonel, 31 May 1861. After some time spent in Washington his regiment was incorporated with others into a brigade attached to Colonel Miles's 5th division in General McDowell's army. During the first battle of Bull Run this division acted as a reserve, and covered the retreat with great steadiness, recovering two Union colors left on the field of battle by retreating soldiers. For his services at that time he was commissioned Brigadier-General of the volunteers 9 August 1861. He remained with the Army of the Potomac until the beginning of the peninsular campaign, when he was ordered to western Virginia. He took an active part in the battle of Cedar Keys, 8 June 1862; but after the arrival of General Fremont he was succeeded by General Sigel. General Blenker was then ordered to Washington, and on 31 March 1863, was mustered out of service. He returned to his farm in Rockland County, where he remained until his death, which resulted from internal injuries received from a fall of his horse in entering the town of Warrenton, Virginia. while with his command.

Start your search on Louis Blenker.