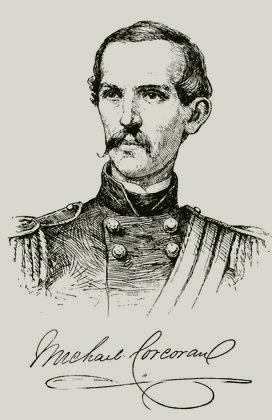 CORCORAN, Michael, soldier, born in Carrowkeel, county Sligo, Ireland, 21 September, 1827; died near Fairfax Court-House, Virginia, 22 December, 1863. He was the son of a captain in the British army, received a good education, and was appointed in the Irish constabulary at the early age of eighteen, but resigned his commission from patriotic too-tives in 1849, immigrated to the United States, and settledin New York City, where he obtained a clerkship in the post-office, and afterward in the office of the City register. He entered the 69th regiment of New York militia as a private, rose through the successive grades, and in August, 1859, was elected colonel. When the militia paraded in honor of the Prince of Wales in 1860, he refused to order out his regiment, for which he was subjected to a trial by court-martial that was still pending when the civil war began. Upon the first call of the president for troops, Col. Corcoran led the 69th regiment to the seat of war. It was ordered into Virginia, built Fort Corcoran on Arlington heights, and fought with impetuous valor at the battle of Bull Run, 21 July, 1861. The colonel was wounded and taken prisoner, and was first sent to Richmond, and afterward taken to Charleston, Columbia, Salisbury, back to Richmond, and to other places, being kept in close confinement for nearly a year. With some other national officers he was reserved for execution in case the United States government carried out its threat of punishing the crews of captured privateers. He was offered his liberty on condition of not again taking up arms against the south, but refused to accept it on such terms. An exchange being finally effected, 15 August, 1862, he was released, and commissioned brigadier-general, dating from 21 July, 1861. He next organized the Corcoran legion, which took part in" the battles of the Nansemond River and Suffolk, during April, 1863, and held the advance of the enemy upon Norfolk in check. In August, 1863, the legion was attached to the Army of the Potomac. General Corcoran was killed by the falling of his horse upon him while he was riding in company with General Thomas Francis Meagher.

Start your search on Michael Corcoran.