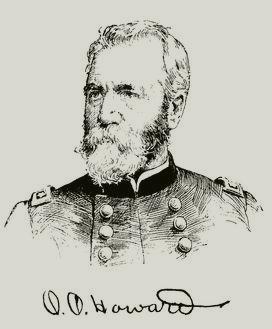 HOWARD, Oliver Otis, soldier, born in Leeds, Maine, 8 November, 1830. He was graduated at Bowdoin in 1850, and at. the United States military academy in 1854, became 1st lieutenant and instructor in mathematics in 1854, and resigned in 1861 to take command of the 3d Maine regiment. He commanded a brigade at the first battle of Bull Run, and for gallantry in that engagement was made brigadier general of volunteers, 3 September, 1861. He was twice wounded at the battle of Fair Oaks, losing his right arm on 1 June, 1862, was on sick leave for six months, and engaged in recruiting service till September of this year, when he participated in the battle of Antietam, and afterward took General John Sedgwick's division in the 2d corps. In November, 1862, he became major-general of volunteers. He commanded the 11th corps during General Joseph Hooker's operations in the vicinity of Fredericksburg, 2 May, 1863, served at Gettysburg, Lookout Valley, and Missionary Ridge, and was on the expedition for the relief of Knoxville in December, 1863. He was in occupation of Chattanooga from this time till July, 1864, when he was assigned to the Army of the Tennessee in the invasion of Georgia, was engaged at, Dalton, Resaca, Adairsville, and Pickett's Mill, where he was again wounded, was at the surrender of Atlanta, and joined in pursuit of the Confederates in Alabama, under General John B. Hood, from 4 October till 13 December, 1864. In the march to the sea and the invasion of the Carolinas he commanded the right wing of General William T. Sherman's army. He became brigadier-general in the United States army, 21 December, 1864. He was in command of the Army of the Tennessee, and engaged in all the important battles from 4 January till 26 April, 1865, occupying Goldsborough, North Carolina, 24 March, 1865, and participating in numerous skirmishes, terminating with the surrender of General Joseph E. Johnston at Durham, North Carolina, 26 April, 1865. In March of this year he was brevetted major-general for gallantry at the battle of Ezra Church and the campaigns against Atlanta, Georgia He was commissioner of the Freedmen's bureau at Washington from March, 1865, till July, 1874, and in that year was assigned to the command of the Department of the Columbia. In 1877 he led the expedition against the Nez Perces Indians, and in 1878 led the campaign against the Bannocks and Plates. In 1881-'2 he was superintendent of the United States military academy. In 1886 General Howard was commissioned major-general, and given command of the division of the Pacific. Bowdoin college gave him the degree of A. M. in 1853, Waterton college, Maine, that of LL.D. in 1865, Shurtleff college the same in 1865, and Gettysburg theological seminary in 1866. He was also made a chevalier of the Legion of honor by the French government in 1884. General Howard has contributed various articles to magazines, his latest being an account of the Atlanta campaign in the "Century" for July, 1887, and has published "Donald's School Days" (1879); "Chief Joseph, or the Nez Perces in Peace and Wax" (1881); and is the author and translator of a "Life of Count Agenor de Gasparin."