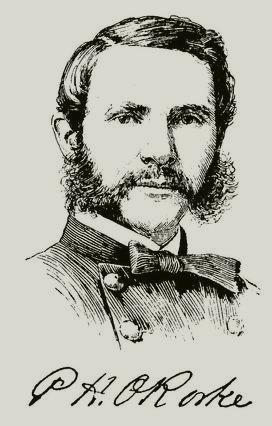 O'RORKE, Patrick Henry, soldier, born in County Cavan, Ireland, 25 March, 1837; killed in the battle of Gettysburg, 2 July, 1863. He came to this country with his parents when but a year old, and in 1842 the family settled in Rochester, New York There young O'Rorke was distinguished as among the brightest pupils in the public schools, and in his sixteenth year he was offered one of the three free scholarships given by the University of Rochester to the city, but declined in deference to the wishes of his mother. He then went to work as a marble-cutter, and remained at his trade until he was appointed to a cadetship in the United States military academy, where he stood third in his class at the end of the first year, and was graduated at the head of it in June, 1861. He was assigned to duty on the staff of General Daniel Tyler, in command of the 1st division of McDowell's army, and served at Blackburn's Ford, 18 July, and Bull Run, 21 July, 1861, his horse being killed under him in the latter action. In August, 1861, he was sent to Fort Monroe, and was afterward assigned to the staff of General Thomas W. Sherman, in command of the Port Royal expedition which sailed, 29 October, 1861. He was employed in constructing the batteries on Tybee island for the reduction of Fort Pulaski, and showed rare skill and talent as an engineer officer, as well as courage and enterprise in a preliminary reconnoissance. On the reduction of the fort, 10 April, 1862, he was selected as one of the officers to receive the surrender. In September, 1862, he accepted the colonelcy of the 140th regiment of New York volunteers. The regiment, which was placed in Warren's brigade, Sykes's division, 5th corps, was composed of good material, and, largely through the effects of its colonel's thorough discipline, became one of the best in the Army of the Potomac. O'Rorke was under fire with his regiment at Fredericksburg, but not actively engaged, Sykes's division being held in reserve near the town. In the Chancellorsville campaign he was temporarily in charge of a brigade. On 2 July, 1863, as he was leading his regiment on to the field of Gettysburg, bringing up the rear of Weed's brigade, his former commander and intimate friend, General Gouverneur K. Warren, then of the engineer corps, met him, and, though without authority to order it, asked him to turn aside and defend Little Round Top, which was seriously threatened, and the loss of which would jeopard the whole battle. On a less important occasion O'Rorke had been known to meet the suggestion of a staff-officer, that he should change the position of his regiment, with the sceptical question: " Is that an order from the general, or is it merely an idea of your own?." But he recognized the nature of the crisis, changed the direction of his advance, and led his men rapidly up Little Round Top. helping to haul the guns of Hazlett's battery to the summit. As he went over the crest, the regiment hesitated for an instant when the storm of fire struck it, and he caught the colors, sprang upon a rock, and fell dead from a bullet-wound through the neck as his men responded to his appeal and his example. The Count of Paris, in his " History of the Civil War," describes the incident in detail. O'Rorke was made brevet 2d lieutenant of engineers, 24 June, 1861 ; 2d lieutenant, 24 June, 1861 ; 1st lieutenant, 3 March, 1863 ; brevet captain, 15 March, 1862, for meritorious service with the Port Royal expeditionary corps: brevet major, 13 December, 1862, for gallant and meritorious service at the battle of Fredericksburg; brevet lieutenant-colonel, 1 May, 1863, for gallant and meritorious service at the battle of Chancellorsville; and brevet colonel, 2 July, 1863, for gallant and meritorious service at the battle of Gettysburg. His widow entered the sisterhood of the Sacred Heart.