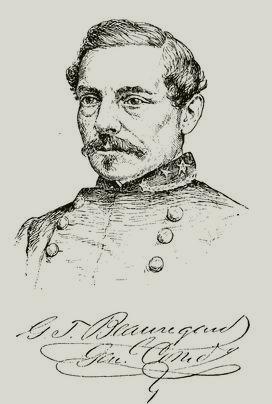 BEAUREGARD, Pierre Gustave Toutant, soldier, born near New Orleans, La., 28 3lay, 1818. He was graduated second in class rank at West Point in 1838. Among his classmates were the future confederate generals Hardee and Sibley and the federal generals Barry, Nichols, Granger, and Mc-Dowell. He was assigned first to the artillery and then to the engineers, and in 1838-'9 was assistant in the construction of Fort Adams, Newport. He was on engineering duty at Barataria bay, La., in 1840-'1, at the passes of the Mississippi in 1841 -'4, and at Fort McHenry, M.d., in 1844-'5. At the beginning of the war with Mexico, he was engaged in the construction of defenses at Tampico (1846-'7), siege operations at Vera Cruz (9 to 29 March 1847), Cerro Gordo (April 17, 18), Contreras (Aug. 19, 20), Chapultepec (Sept. 13), and city of Mexico (Sept. 13, 14), where he was twice wounded. Shortly afterward he was brevetted major. He attained the full rank of captain of engineers, 3 March 1853, for fourteen years of continuous service as lieutenant. Returning to the United States, he was assigned to duty in the vicinity of New Orleans, superintending the construction and repair of fortifications in Mobile harbor and on the Mississippi river, also of harbor construction in Lake Pontchartrain, and as constructing engineer of the custom-house in New Orleans. His supervisory duties extended over the gulf coast from Florida to the Rio Grande. On 23 January 1861, he was detailed as superintendent of the military academy at West Point, but held the place only a few days, resigning his commission 20 February 1861. This ends his record as a military officer of the United States. He at once offered his services to the southern confederacy, then organizing to resist the authority of the federal government, and was placed in command of the defenses of Charleston, South Carolina On the refusal of Major Robert Anderson to evacuate Fort Sumter, he opened fire soon after daylight on the morning of 12 April 1861. After a cannonade of several hours, during which, according to the official reports, not a single life was lost on either side, Fort Sumter, with ammunition and provisions nearly exhausted, capitulated to General Beauregard, and the garrison marched out with the honors of war. Beauregard was almost immediately ordered to Virginia, where he was practically in command at the battle of Bull Run (July 21), though superseded at the last moment by General J. E. Johnston. Here he was again victorious. In the spring of 1862 he was ordered to Tennessee, as second in command to General A. S. Johnston, and when that officer was killed at the battle of Shiloh, April 6, Beauregard took command and nearly succeeded in routing the northern army. The next day, however, the federals having been re-enforced, he was compelled to retreat by General Grant, falling back in good order to Corinth, Mississippi, where he made a successful defense until 29 May when he evacuated the place, destroying all his stores, and retreating southward along the Mobile and Ohio railroad. General Beauregard's health failed after this campaign, and he was on leave of absence until August when, with the full rank of general, he was again placed in command at Charleston, which for a year and a half (Sept., 1862, till April 1864) he defended against the formidable siege operations under General Gillmore and Admirals Dupont and Dahlgren. In May 1864, when General Grant was closing in upon the approaches to Richmond, Beauregard re-enforced Lee, defeated Butler at Drury's Bluff, and held Petersburg against the federal advance. In October he was appointed commander of the military division of the west, and sent to Georgia to resist the march of the federals under Sherman. The attempt proved futile, and, joining forces with General J. E. Johnston in North Carolina, he surrendered with that officer to General Sherman in April 1865. After the war he became president of the New Orleans, Jackson, and Mississippi railroad, adjutant-general of the state, and manager of the Louisiana state lottery. See "Military Operations of General Beauregard in the War between the States, 1861-'5," by Colonel Alfred Roman (New York, 1884). General Beauregard is the author of "Principles and Maxims of the Art of War" (Charleston, 1863), and "Report of the Defence of Charleston" (Richmond, 1864).