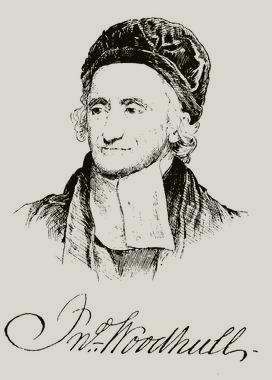 WOODHULL, Richard, colonist, born in Then-ford, Northampton, England, 13 September, 1620; died in Brookhaven, New York, 17 October, 1690. He came to this country probably in 1648, on 29 April of which year he witnessed a deed at Easthampton, Long Island. He settled permanently at Brookhaven, Suffolk County, New York, in 1655, of which place he became proprietor in two patents--that of Governor Richard Nicolls in 1666 and that of Geo. Thomas Dongan in 1686. In 1663 he represented Brookhaven at the general court at Hartford in an effort to obtain aid against the usurpations of the Dutch. In 1666 he was appointed one of the justices of the court of assizes, and in 1673 he became deputy to the Dutch commissioners in New York, and by them was commissioned a magistrate for Brookhaven.--His great-grandson, Nathaniel, soldier, born in St. George's manor, Long Island, New York, 30 December, 1722; died in New Utrecht, Long Island, 10 September, 1776. He served as major, under General Abercrombie, in the attack upon Crown Point and Ticonderoga in 1758, afterward accompanied Bradstreet against Fort Frontenac, and was a colonel under General Jeffrey Amherst in 1760. He was a representative from Suffolk county in the colonial assembly from 1769 till 1775, and was active there in resisting the encroachments of the crown. The colonial government was suspended in May, 1775, from which time till April, 1777, New York was governed by the Provincial congress, of which General Woodhull was president in 1775, and again in 1776. He was appointed brigadier-general in August, 1775, and, on the landing of the British on Long Island, put himself at the head of the militia. A few days after the disastrous battle of Long Island he was surprised by a body of British light horse near Jamaica. He surrendered his sword, but was afterward so severely wounded by the troopers that he died in consequence. A narrative of General Wood-hull's capture and death was published by Henry Onderdonk, Jr. (New York, 1848), and his journal of the Montreal expedition of 1760 appeared in the "Historical Magazine" for September, 1861.--Richard's great-great-grandson, William, clergyman, born in Miller's Place, Long Island, New York, 3 December, 1741; died in Chester, Morris County, New Jersey. 24 October, 1824, was graduated at Princeton in 1764, entered the ministry, and in 1777 occupied the Black River (now Chester) pulpit, Morris County, New Jersey He was a member of the Provincial congress of New Jersey which met at Burlington, 9 June, 1776, deposed Governor William Franklin, the last royal governor, and framed the first constitution of New Jersey, 2 July, 1776, and of the convention that met at Trenton on 11 December, 1787, and adopted the United States constitution.--William's brother, John, clergyman, born in Miller's Place, Long Island, New York, 26 January, 1744; died in Freehold, New Jersey, 22 November, 1824, was graduated at Princeton in 1766, pursued theological studies with the Reverend John Blair, of Faggs Manor, Pennsylvania, and was ordained pastor of Lea-cock Presbyterian church, Lancaster County, Pennsylvania, 1 August, 1770, where he remained ten years. In 1779 he was called to Freehold, New Jersey, to succeed William Tennent. In 1780 he was elected a trustee of Princeton, to which institution he devoted his most faithful attention. In 1785 Mr. Woodhull was one of a committee appointed by synod to form a complete system for the organization of the Presbyterian church in the United States. This resulted in the formation of the general assembly and the present form of government and discipline. In 1798 he received the degree of D. D. from Yale. In 1812 he was one of the founders of Princeton theological seminary. While pastor at Leacock in 1777 he induced all his male parishioners to shoulder their muskets for Valley Forge, and accompanied them as chaplain. Afterward at Freehold, in 1782, he wrote to General Washington begging him to retaliate by the execution of one of the English officers, then in his hands, for the murder, without trial, of Captain Joshua Huddy, of Monmouth, whose funeral sermon Dr. Woodhull delivered from the court-house steps to an immense audience from the adjoining counties. This request, was granted, and Captain Asgell, of the British army, was designated by lot to expiate the offence. Meanwhile, however, the English general organized a court-martial to examine into the affair, when it was found that the execution of Huddy had been perpetrated under instructions from William Franklin, late governor of New Jersey, then in New York, and president of the Associated Loyalists. Asgell was accordingly released. Only three of Dr. Woodhull's printed sermons have been preserved--"The Establishment of the Federal Constitution" (1787); "The Death of General Washington" (1799); and an ordination sermon (1813).

Start your search on Richard Woodhull.