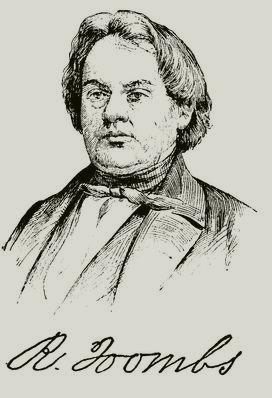 TOOMBS, Robert, senator, born in Wilkes county, Georgia, 2 July, 1810; died in Washington, Georgia, 15 December, 1885. He studied at the University of Georgia, was graduated at Union college in 1828, attended lectures in the law department of the University of Virginia the next year, and in 1830, by a special act of the legislature, was admitted to the bar before he had attained his majority. He then settled in his native county, subsequently attaining a reputation such as few lawyers ever enjoyed in the state. When the war with the Creek Indians began in 1836 he raised a company of volunteers, led them as their captain, and served under General Winfield Scott until the close of hostilities. He was in the legislature in 1837-'40, and in 1842-'3 took an active part in polities, and was a leader of the so-called "State-rights Whigs." He supported William H. Harrison for the presidency in 1840, and Henry Clay in 1844, and in the latter year was chosen to congress as a Southern Whig. His first speech in the house of representatives was on the Oregon question, and placed him among the first debaters and orators in that body. He was active in the compromise measures in 1850, and greatly contributed to their passage. After eight years' service in the house he took his seat in the United States senate in March, 1853, holding office by re-election till 1861. As a senator he was intolerant, dogmatic, and extreme, but able and eloquent. He believed in the absolute sovereignty of the states, and that it was a necessity for the south both to maintain and extend slavery. He advocated disunion with all the force of his oratory, and after the election of Abraham Lincoln to the presidency made a series of speeches in Georgia in which he asserted that the north would no longer respect the constitutional rights of the south, and that secession was the only remedy. When the State convention met in 1861, he was mainly instrumental in securing the majority of votes on the resolution to secede. He resigned his seat in the United States senate in January, 1861, and in March was formally expelled from that body. He was a member of the Confederate congress at its first session, and but for a misunderstanding might have been chosen president of the Confederacy. After the election of Jefferson Davis he became secretary of state, but resigned in a few weeks to take the commission of brigadier-general in the army. He fought at the second battle of Bull Run and at the Antietam, but resigned and returned to Georgia. In 1864 he commanded the militia, of which he was brigadier-general. After the war he eluded arrest as a political prisoner, and passed two years in Cuba, France, and England, but returned on the restoration in 1867 of the privilege of habeas corpus, resumed practice, and accumulated an estate that was estimated at about $500,000. As he refused to take the oath of allegiance to the United States government, he was debarred from all the rights and privileges of citizenship. He was a member of the Georgia Democratic state convention in 1872, and advocated Horace Greeley as a candidate for the presidency. In 1874 he began the railroad war, to which he devoted his energies until his death. The legislature of that year had passed a law taxing railroads as all other property was taxed. The railroads resisted, and General Toombs, in behalf of the state, took the matter into court, established the principle that they should pay the same taxes as other property, anal collected $300,000, including some arrears of taxes. In the State convention of 1877 he introduced a resolution providing for the appointment of three commissioners who should have the power to oversee the business of the roads, to make and unmake rates, and to order improvements. In accordance with this provision, the next legislature adopted what is known as the commission railroad law. He continued his hostility to the United States government until his death.

Start your search on Robert Toombs.