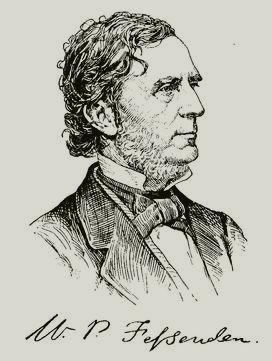 FESSENDEN, Samuel, lawyer, born in Fryeburg, Maine, 16 July 1784; died near Portland, Maine, 13 March 1869. His father, the Rev. William Fessenden, graduated at Harvard in 1768, was the first minister of Fryeburg, and frequently a member of the Massachusetts legislature. He also served as judge of probate. Samuel received his earn education at the Fryeburg academy, and was graduated at Dartmouth in 1806. He studied law with Judge Dana, of Fryeburg, was admitted to the bar in 1809, and began practice at New Gloucester, where he rose to distinction in his profession. In 1815'16 he was in the general court of Massachusetts, of which state Maine was then a district, and in 1818'19 represented his district in the Massachusetts senate.

For fourteen years he was major general of the 12th division of Massachusetts militia, to which office he was elected on leaving the senate, and to which he gave much attention. He removed to Portland in 1822, and about 1828 declined the presidency of Dartmouth. He was an ardent Federalist, and one of the early members of the antislavery party in Maine. In 1847 the Liberty party, receiving large votes, nominated him for governor and for congress. For forty years he stood at the head of the bar in Maine. He was an active philanthropist. He published two orations and a treatise on the institution, duties, and importance of juries. Bowdoin conferred the degree of LL.D. upon him in 1846.

His son, William Pitt Fessenden, senator, born in Boscawen, New Hampshire, 16 October 1806; died in Portland, Maine, 8 September 1869, was graduated at Bowdoin in 1823, studied law, and was admitted to the bar in 1827. He practiced law first in Bridgeton, a year in Bangor, and afterward-in Portland, Maine He was a member of the legislature of that state in 1832, and its leading debater. He refused nominations to congress in 1831 and in 1838, and served in the legislature again in 1840, becoming chairman of the house committee to revise the statutes of the state. He was elected to congress as a Whig in 1840, serving one term, during which time he moved the repeal of the rule that excluded antislavery petitions, and spoke upon the loan and bankrupt bills, and the army. He gave his attention wholly to his law business till he was again in the legislature in 1845'6.

He acquired a national reputation as a lawyer and an antislavery Whig, and in 1849 prosecuted before the Supreme Court an appeal from an adverse decision of Judge Story, and gained a reversal by an argument which Daniel Webster pronounced the best he had heard in twenty years. He was again in the legislature ill 1853 and 1854, when his strong antislavery principles caused his election to the U. S. Senate by the vote of the Whigs and anti slavery Democrats. Taking his seat in February 1854, he made, a week afterward, an electric speech against the Kansas Nebraska bill, which placed him in the front rank of the senate. He took a leading part in the formation of the Republican Party, and from 1854 till 1860 was one of the ablest opponents of the proslavery measures of the Democratic administrations. His speech on the Clayton-Bulwer treaty, in 1856, received the highest praise, and in 1858 his speech on the Lecompton constitution of Kansas, and his criticisms of the opinion of the Supreme Court in the Dred Scott case, were considered the ablest discussion of those topics. He was reelected to the senate in 1859 without the formality of a nomination. In 1861 he was a member of the Peace congress.

By the secession of the southern senators the Republicans acquired control of the senate, and placed Mr. Fessenden at the head of the finance committee. During the civil war he was the most conspicuous senator in sustaining the national credit. He opposed the legal tender act as unnecessary and unjust. As chairman of the finance committee, Mr. Fessenden prepared and carried through the senate all measures relating to revenue, taxation, and appropriations, and, as declared by Mr. Sumner, was " in the financial field all that our best generals were in arms." When See. Chase resigned in 1864, Mr. Fessenden was called by the unanimous appeal of the nation to the head of the treasury. It was the darkest hour of our national finances. Sec. Chase had just withdrawn a loan from the market for want of acceptable bids; the capacity of the country to lend seemed exhausted. The currency had been enormously inflated, and gold was at 280. Mr. Fessenden refused the office, but at last accepted in obedience to the universal public pressure. When his acceptance became known, gold fell to 225, with no bidders. He declared that no more currency should be issued, and, making an appeal to the people, he prepared and put, upon the market the seven thirty loan, which proved a triumphant success. This loan was in the form of bonds bearing interest at the rate of 7.30 per cent, which were issued in denominations as low as $50, so that people of moderate means could take them.

He also framed and recommended the measures, adopted by congress, which permitted the subsequent consolidation and funding of the government loans into the four and four-and-a-half percent bonds. The financial situation becoming favorable, Mr. Fessenden, in accordance with his expressed intention, resigned the secretary ship in 1865 to return to the senate, to which he had now for the third time been elected. He was again made chairman of the finance committee, and was also appointed chairman of the joint committee on reconstruction, and wrote its celebrated report, pronounced one of the ablest state papers ever submitted to congress. It vindicated the power of congress over the rebellious states, showed their relations to the government under the constitution and the law of nations, and recommended the constitutional safeguards made necessary by the rebellion.

Mr. Fessenden was now the acknowledged leader in the senate of the Republicans, when he imperiled his party standing by opposing the impeachment of President Johnson in 1868. He gave his reasons for voting "not guilty" upon the articles, and was subjected to storm of detraction from his own party such as public men have rarely met. His last service was in 1869, and his last speech was upon the bill to strengthen the public credit. He advocated the payment of the principal of the public debt in gold, and opposed the notion that it might lawfully be paid in depreciated greenbacks.

His public character was described as of the highest type of patriotism, courage, integrity, and disinterestedness, while his personal character was beyond reproach. He was noted for his swiftness of retort. He was a member of the Whig national conventions that nominated Harrison (1840), Taylor (1848), and Scott (1852). For several years he was a regent of the Smithsonian institution. He received the degree of LL.D. from Bowdoin in 1858, and from Harvard in 1864.

Another son, Samuel Clement Fessenden, lawyer, born in New Gloucester, Maine, 7 March 1815 ; died in 1881, was graduated at Bowdoin in 1834, and at Bangor theological seminary in 1837, and was pastor of the 2d Congregational Church in Thomaston (now Rockland) from then till 1856. In that year he established the "Maine Evangelist," and in 1858 studied law, was admitted to the bar, and began practice, He was elected judge of the municipal court" of Rockland, and was a representative from Maine to the 37th congress, serving from July 1861, till March 1863. Until the rise of the Republican Party he was an abolitionist. In 1865 he was appointed a member of the board of examiners of the U. S. patent office. In 1879 he was U. S. consul at St. John's, N. B.

Another son, Thomas Amory Deblois Fessenden, lawyer, born in Portland, Maine, 23 January 1826; died in Lewiston, Maine, 28 September 1868, was graduated at Bowdoin in 1845. He studied law, was admitted to the bar, and began practice in Mechanics' Falls, Maine, after which he removed to Lewiston. He was a member of the convention that nominated Fremont for president in 1856, in 1858 was appointed aide-de-camp to Governor Morrill, of Maine, and in 1860 was elected to the legislature. In 1861 he was prosecuting attorney for Androscoggin County, and was elected a representative from Maine to the 37th congress, to fill a vacancy, serving from December 1862, till March 1863. He was an able lawyer and eloquent speaker.

William Pitt's son, James Deeriug Fessenden, born in Westbrook, Maine, 28 September 1833: died in Portland, Maine, 18 November 1882, was graduated at Bowdoin in 1852, studied law, and practiced in Portland. He enlisted a company early in the civil war, and entered the service as captain of the 2d U. S. sharpshooters, 2 November 1861. He served on General David Hunter's staff in the Department of South Carolina in 1862'3, was present at the attack on Fort McAllister in 1862, at the operations on the Edisto, and at Dupont's attack on Charleston. He was assigned to the duty of organizing and commanding the first regiment of colored troops in 1862, but the government was not then ready to use colored troops. He was promoted to colonel in 1862, and in September 1863, reported to General Hooker, and was engaged in the campaign of Lookout Mountain and Missionary Ridge, and in the Atlanta campaign in 1864. He was promoted brigadier general of volunteers, 8 August 1864, ordered to General Sheridan in October and was with him at Cedar Creek. On 13 March 1865, he was brevetted major general of volunteers, and was on duty in South Carolina. He was appointed register in bankruptcy for the first district of Maine in 1868, and represented Portland in the legislature in 1872'4.

Another son of William Pitt, Francis Fessenden, soldier, born in Portland, Maine, 18 March 1839, was graduated at Bowdoin in 1858, and studied law at Harvard and in New York. He was appointed captain in the 19th U. S. infantry on 14 May 1861, and was severely wounded at Shiloh. From October 1862, till July 1863, he was colonel of the 25th Maine volunteers, and commanded a brigade in front of Washington and near Centreville, Virginia. He was appointed brigadier general of volunteers, 10 May 1864, and major general, 9 November 1865. In 1864 he was with General Banks in the Red River expedition, and was present at Sabine Crossroads, Pleasant Hill, and Monett's Bluff, where, leading his brigade in an assault, he lost a leg. In November 1864, he was on duty in Washington, and in 1865 was in command of the 1st infantry division, Department of West Virginia, and was afterward assigned to Hancock's 1st veteran corps. He was a member of the Wirtz military commission in Washington in 1865, and assistant commander of the bureau of refugees, freedmen, and abandoned lands in 1866. He was retired with the rank of brigadier general in the regular army, 1 November 1866. He served as mayor of Portland in 1876, but declined a renomination.

Another son of William Pitt, Samuel Fessenden, soldier, born in Portland, Maine, 6 January 1841; died in Centreville, Virginia, 1 September 1862, was graduated at Bowdoin in 1861. He began to study law, but soon entered' the military service as 2d lieutenant in the 2d Maine battery, 30 November 1861. He was promoted to 1st lieutenant, 3 June 1862, was aide to General Zebulon B. Tower in July 1862, and was mortally wounded in the second battle of Bull Run, 31 Aug. Samuel Clement's son, Joshua Abbe Fessenden, born in Rockland, Maine, was appointed 2d lieu tenant in the 1st U. S. cavalry, 24 March 1862; 2d lieutenant 5th artillery, 6 September 1862; 1st lieutenant, 30 November 1865 ; captain, 26 June 1882 ; and was wounded at Chickamauga. Another son, Samuel Fessenden, born in Rockland, Maine, was appointed 2d lieutenant in the 5th Maine battery, 18 January 1865. He is a lawyer and politician in Stamford, Conn.

Start your search on Samuel Fessenden.