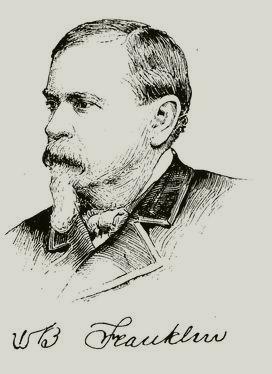 FRANKLIN, William Buel, soldier, born in York, Pennsylvania, 27 February 1823. He was graduated at the U. S. military academy in 1843 at the head of his class, among the members of which were Ulysses S. Grant, Christopher C. Augur, and James A. Hardie. He served in the topographical engineers until the outbreak of the civil war, the dates of his various commissions being as follows: 2d lieutenant, 21 September 1846; 1st lieutenant, 3 March 1853; and captain, 1 July 1857. He was brevetted 1st lieutenant, 23 February 1847, for gallantry at the battle of Buena Vista. In the Mexican war he was attached to the staff of General Taylor as a topographical engineer, was engaged in making reconnaissance, and carried Taylor's orders on the battlefield of Buena Vista. His other service prior to 1861 was such as ordinarily falls to an engineer officer, he was engaged in surveys on the western plains and mountains, as assistant professor at West Point, as engineer secretary of the lighthouse board, and in charge of the construction of lighthouses and public buildings. At the beginning of the civil war he was stationed in Washington in charge of the construction of the capitol, the treasury department, and the general post office. He was appointed colonel of the 12th infantry, 14 May 1861, brigadier general of volunteers, 17 May 1861, of volunteers, 4 July 1862.

He received the brevet of brigadier general in the regular army, 30 June 1862, for his gallant conduct in the battles before Richmond, and of major general, 13 March 1865, for services during the rebellion. His first active service was at Bull Run, where he commanded a brigade in Heintzleman's division, and was engaged in the heaviest part of the battle, around the Henry house. On the organization of the Army of the Potomac he received a division, and, when the 6th army corps was formed, he was placed in its command, retaining it throughout the year 1862. He was in most of the battles on the peninsula Yorktown, West Point, White Oak Bridge, Savage's Station, Malvern Hill, and Harrison's Landing. After his return to Maryland with the army, he was in command on the field of Crampton's Gap, South Mountain, 14 September 1862, and was engaged in the battle of Antietam, 17 September 1862. At the battle of Fredericksburg, 13 December 1862, he commanded the left grand division, consisting of his own corps, the 6th, under William F. Smith, and the 1st corps, under John F. Reynolds. (See BURNSIDE.) General Burnside complained to the committee on the conduct of the war that Franklin did not obey his orders in this battle, and the latter was sharply censured by the committee. He was also one of the generals removed by Burnside for insubordination, and the failure of the president to approve the order of removal led to Burnside's resignation of his command.

After being on waiting orders for several months, General Franklin was returned to active service in July 1863, and on 15 August 1863, was assigned to the command of the 19th army corps. He took part in the Red River expedition of 1864, and was wounded in the battle of Sabine Crossroads, 8 April 1864. He was obliged to leave the army on account of illness, 29 April 1864, and remained on leave of absence till 2 December when he was assigned to duty on retiring board at Wilmington, Del. During his leave he was captured by Confederate raiders while he was riding on the Philadelphia and Baltimore railroad, 11 July 1864, but escaped from them on the following night.

He resigned, 15 March 1866, and since has been engaged as vice president of the Colt's firearms company at Hartford, Connecticut, and in various other manufacturing enterprises. He has had charge of the construction of the new statehouse at Hartford, was state commissioner at the Centennial exposition of 1876, presidential elector in 1876, adjutant general of Connecticut in 1877 and 1878, and president of the board of managers of the National home for disabled soldiers in 1880'7. He has contributed various articles to the "American Cyclopaedia" and to periodical literature on military subjects.

His brother, Salnuel Rhoads Franklin, naval officer, born in York, Pennsylvania, 25 August 1825, was appointed midshipman, 18 February 1841, attached to the frigate" Cumberland," of the Pacific squadron, in 1841'3, and to the frigate "United States" and storeship "Relief," in the Pacific, in 1845'7. He was present at the demonstration on Monterey during the Mexican war, promoted to passed midshipman, 10 August 1847, and assigned to duty on the "Independence," of the Mediterranean squadron for 1849'52, and to the coast survey, 1853'5. He was commissioned master, 18 April 1855, and lieutenant, 14 September following, served in the naval academy in 1855'6, on the sloop "Falmouth," of the Brazil squadron, in 1857'9, on the "Macedonian" in 1859'60, and on the steam sloop "Dacotah," on the Atlantic coast, in 1861'2. He was a volunteer on board the "Roanoke" in the action with the "Merrimac" in March 1862, in which the "Congress" and the "Cumberland" were destroyed, he became executive officer of the "Roanoke," and engaged with the forts at Sewell's point, but the sloop grounded, and did not get fairly into action. He was commissioned lieutenant commander, 16 July 1862, commanded the "Aroostook," of the James River flotilla, in 1862, the "Aroostook," of the western Gulf blockading squadron, in 1863, and was on special duty in New Orleans in 1864.

During the operations in Mobile bay in the spring of 1865 he was on the staff of acting rear admiral Thatcher, and was the naval representative in the demand for the surrender of the City of Mobile. He was made commander, 26 September 1866, and given the steamer "Saginaw," of the north Pacific squadron, in 1866'7, on ordnance duty at Mare Island, California, in 1868'9, was advanced to the grade of captain, 13 August 1872, and commanded the "Wabash " and afterward the "Franklin" until transferred to duty as hydrographer to the bureau of navigation at Washington, D.C. He was promoted to commodore, 15 December 1880, assigned to special duty in the bureau of equipment department, and became president of the board of examiners, 16 June 1883. He received the appointment of rear admiral, 24 January 1885, was assigned to duty, as superintendent of the naval observatory, and in 1886 became commandant of the European station. In August 1887, he will be of legal age to be retired.