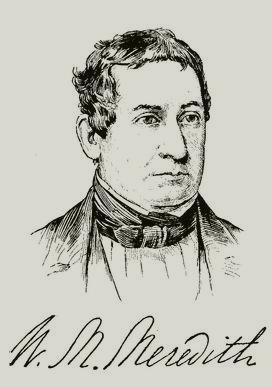 MEREDITH, William Norris, cabinet officer, born in Philadelphia, Pennsylvania, 8 June, 1799; died there, 17 August, 1873. He was graduated at the University of Pennsylvania in 1812, studied law, and about 1820 began practice. He was in the legislature in 1824-'8, president of the select council of Philadelphia in 1834-'49, and a member of the State constitutional convention of 1837. He became secretary of the United States treasury in 1849, and held office until the death of President Taylor. He was attorney-general of Pennsylvania in 1861-'7, and president of the State constitutional convention in 1873. As a lawyer, Mr. Meredith occupied for many years the foremost rank in his native state, and was constantly engaged in important eases in the supreme court of Pennsylvania, and that of the United States. As a ready and able legal debater, he had few superiors in this country.--His brother, Sullivan Amory, soldier, born in Philadelphia, Pennsylvania, 5 July, 1816 ; died in Buffalo, New York, 27 December, 1874, was educated at William and Mary. He twice visited China, and in 1848 went to California. When the civil war began he was in business in Philadelphia. On 25 April, 1861, he was commissioned colonel of the 10th Pennsylvania regiment, and superintended the drilling, equipment, and forwarding of over 30,000 troops. He took part in Patterson's campaign in the Shenandoah valley, and on his return organized and was commissioned colonel of the 56th regiment. In the winter of 1861-'2 he garrisoned Fort Albany. The following April he was assigned to McDowell's corps, with which he served up to the second battle of Bull Run, where he was severely wounded. For his gallantry in this engagement he was promoted to brigadier-general of volunteers, 29 August, 1862. When partly recovered, he was appointed commissioner for the exchange of prisoners. In 1864 he was ordered to St. Louis, and served under General Rosecrans until 24 August, 1865, when he was mustered out. General Meredith contributed a series of letters to the Buffalo "Commercial Advertiser" in 1868, controverting the statements of the Confederate commissioner Robert Ould, in charging upon General Grant a responsibility for the barbarities of the Confederate authorities to captured National soldiers.