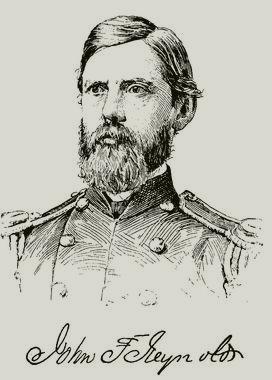 REYNOLDS, William, naval officer, born in Lancaster, Pennsylvania, 18 December, 1815; died in Washington, D. C., 5 November, 1879. He was appointed midshipman in the United States navy in 1831, served on Captain Charles Wiikes's exploring expedition in 1838-'42, was commissioned lieutenant in 1841, and was placed on the retired list in consequence of failing health in 1851. He was then assigned to duty in the Sandwich islands, where he was instrumental in effecting the Hawaiian treaty of reciprocity. He returned to active service in 1861, was made commander in 1862, with the charge of the naval forces at Port Royal, became captain in 1866, senior officer of the ordnance board in 1869-'70, and commodore in the latter year. He served as chief of bureau and acting secretary of the navy in 1878 and again in 1874, became rear-admiral in December, 1873, and in December, 1877, was retired on account of continued illness. His last service was in command of the United States naval forces on the Asiatic station. Of Admiral Reynolds's services the secretary of the navy, Richard W. Thompson, in the order that announced his death, said: " In the administration of the duties committed to him, he did much to improve the personnel and efficiency of the enlisted men of the navy, and in the discharge of all the duties devolving on him, during a long career in the service, he exhibited zeal, intelligence, and ability, for all of which he was conspicuous." See " Reynolds Memorial Address," by Joseph O. Rosengarten (Philadelphia. 1880).--His brother, John Fulton, soldier, born in Lancaster, Pennsylvania, 20 September, 1820; died near Gettysburg, Pennsylvania, 1 July, 1868, was graduated at the United States military academy in 1841, became 1st lieutenant in 1846, received the brevet of captain in June of that year for his service at Monterey, and was given that of major for Buena Vista in January, 1847 He became captain in 1855, was mentioned in general orders for his services in the expedition against the Rogue river Indians in Oregon, took part in the Utah expedition under Gem Albert Sidney Johnston in 1858, and in 1859 became commandant of cadets at the United States military academy. He was appointed lieutenant-colonel of the 14th infantry in May, 1861, and on 20 August brigadier-general of United States volunteers, and was assigned to the command of the 1st brigade of Pennsylvania reserves, He was appointed military governor of Fredericksburg, Virginia, in May, 1862, and was engaged at the battles of Mechanicsville, Gaines's Mills, and Glendale, where he was taken prisoner. So great was his popularity in Fredericksburg that the municipal authorities went to Richmond and solicited his exchange. During his captivity he prepared a careful report of the operations of his command under General George B. McClellan. He rejoined the army on his exchange, 8 August, 1862, was engaged in the campaign of northern Virginia, and commanded his division at the second battle of Bull Run. At a critical time in that battle, when his brigade, unable to hold the enemy in check, fell back in confusion, observing that the flag-staff of the 2d regiment had been broken by a bullet, he seized the flag from the color-bearer and, dashing to the right, rode twice up and down the line, waving it and cheering his men. The troops rallied, and General George H. Gordon, in his "Army of Virginia," says, "Reynolds's division, like a rock, withstood the :advance of the victorious enemy, and saved the Union army from rout." He was assigned to the command of the state militia, in defence of Pennsylvania during the Maryland campaign, and on 29 September, 1862, received the thanks of the legislature for his services, tie was commissioned major-general of volunteers, 29 November, 1862, succeeded General Joseph Hooker in command of the 1st corps of the Army of the Potomac, was engaged on the left at the battle of Fredericksburg, and was promoted colonel of the 5th United States infantry, 1 June, 1863. On the opening day of the battle of Gettysburg, 1 July, 1863, where he was in command of the left wing--the 1st, the 3(1, and the 11th corps, and Buford's cavalry division--he encountered the van of Lee's army, and, after making disposition of his men in person, and urging them on to a successful charge, he was struck by a rifle-ball that caused instant death. A sword of honor was awarded him by the enlisted men of the Pennsylvania reserves at the close of the peninsula campaign. The men of the 1st corps erected a bronze heroic statue of him, by John Q. A. Ward, on the field of Gettysburg, and subsequently placed his portrait, by Alexander Laurie, in the library of the United States military academy, and the state of Pennsylvania placed a granite shaft on the spot where he fell at Gettysburg. On 18 September, 1884, the Reynolds memorial association unveiled in Philadelphia a bronze equestrian statue of General Reynolds, by, John Rogers, the gift of Joseph E. Temple. See " Reynolds Memorial Address," by Joseph G. Rosengarten (Philadelphia, 1880), and " The Unveiling of the Statue of General John F. Reynolds, by the Reynolds Memorial Association" (1884).

Start your search on William Reynolds.