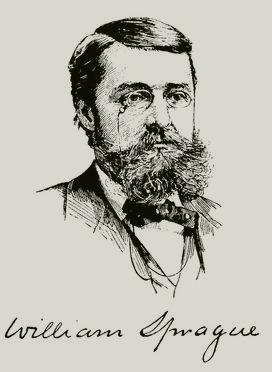 SPRAGUE, William, governor of Rhode Island, born in Cranston, Rhode Island, 3 November, 1799; died in Providence, Rhode Island, 19 October, 1856. He received a good education at an early age, became a member of the assembly, and in 1832 was chosen speaker of the house. He was then elected to congress as a Democrat, served from 7 December. 1835, till 3 March, 1837, and, declining a re-election, became governor of Rhode Island in 1838-'9. He was elected to the United States senate in place of Nathan F. Dixon, serving from 18 February, 1842, till 17 January, 1844, when he resigned, and was subsequently a member of the Rhode Island legislature. In 1848 he was an elector on the Taylor and Fillmore ticket. He was largely engaged in the manufacture of cotton, and was president of the Hartford, Providence, and Fishkill railroad, and of two banks.--His nephew, William, governor of Rhode Island, born in Cranston, Rhode Island, 12 September, 1830, received his education in common schools, served in his father's factory, and engaged in making calico-prints. Subsequently he became a manufacturer of linen, woollen goods, and iron, a builder of locomotives, and an owner of railroads and steamships. In 1860-'3 he was governor of Rhode Island He had served as colonel in the state militia, offered a regiment and a battery of lighthorse artillery for service in the civil war, and with this regiment participated in the battle of Bull Run, where his horse was shot under him. He received a commission as brigadier-general of volunteers, which he declined. He also served in other actions during the peninsular campaign, including Williamsburg and the siege of Yorktown. He was chosen to the United States senate as a Republican, was a member of the comlnittee on manufactures, and chairman of that on public lands, his term extending from 4 March, 1863, till 3 March, 1875, when he resumed the direction of his manufacturing establishments. He operated the first rotary machine for making horseshoes, perfected a mowing-machine, and also various processes in calico-printing; especially that of direct printing on a large scale with the extract of madder without a chemical bath. Governor Sprague claims to have discovered what he calls the "principle of the orbit as inherent in social forces." He asserts that money is endowed with two tendencies, the distributive and the aggregative, and that when the latter predominates, as before the civil war, decadence results; but that when the former is in the ascendancy, as was until recently the ease, there is progress. He received the degree of A. M. from Brown in 1861, of which university he has been a trustee since 1866.

Start your search on William Sprague.