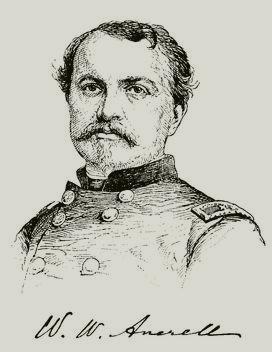 AVERELL, William Woods, soldier, born in Cameron, Steuben County, New York, 5 November 1832. His grandfather, Ebenezer Averell, was a captain in the revolutionary army under Sullivan. Young Averell was graduated at the United States Military Academy in June 1855, and assigned to the mounted riflemen. He served in garrison and at the school for practice at Carlisle, Pennsylvania, until 1857, when he was ordered to frontier duty, and saw a great deal of Indian fighting, mainly against the Kiowas and Navajos. He was severely wounded in a night attack by the Navajos in 1859, and was on sick-leave until the outbreak of the civil war in 1861. he was promoted to be first lieutenant of the mounted riflemen 14 May 1861, and was on staff duty in the neighborhood of Washington, participating in the battle of Bull Run and other engagements until 23 August 1861, when he was appointed colonel of the 3d Pennsylvania cavalry, and commanded the cavalry defenses in front of Washington. He was engaged with the army of the Potomac in its most important campaigns. In March 1863, he began the series of cavalry raids in western Virginia that made his name famous. The first notable one was on the 16th, 17th, and 18th of March and included the battle of Kelly's Ford, on the upper Rappahannock. In August he drove a confederate force over the Warm Spring mountains, passed through several southern counties, and near White Sulphur Springs attacked a force posted in Rocky Gap, for the possession of which a fight ensued, lasting two days (26 and 27 August). Averell was repulsed with heavy loss, but made his way back to the union lines with 150 prisoners. On 5 November he started with a force of 5,000 men and drove the confederates out of Greenbrier County, capturing three guns and about 100 prisoners. In December he was again in motion, advancing with a strong force into southwestern Virginia. On 16 December he struck the Virginia and Tennessee railroad at Salem, General Longstreet's base of supplies. He destroyed the railroad, severing an important line of communication between the confederate generals Lee and Bragg, and burned a large quantity of provisions, clothing, and military equipments. When he began his retreat the alarm had been given, and all the mountain passes were held by the confederates. He captured a bearer of dispatches, learned the enemy's plans, and forced the position defended by General W. S. Jackson (" Mudwall," as he was called, to distinguish him from his more famous namesake). A second line concentrated to cut off his retreat, but he led his command over a road supposed to be impassable, and reached the federal lilies with 200 prisoners and 150 horses, having lost 11 men killed or drowned and 90 missing. "My command," he said in his report (21 December 1863), "has marched, climbed, slid, and swum three hundred and forty miles since the 8th inst." After the exposure and hardships of this raid he was obliged to ask for sick-leave, extending to February. On his return to duty he was placed in command of the 2d cavalry division, and from that time until September 1864, the fighting was almost continuous. He was wounded in a skirmish near Wytheville, but was in the saddle and under fire again two days afterward, destroying a section of the Tennessee railroad. In June he crossed the Allegheny mountains, in July he was fighting in the Shenandoah valley and at Winchester. In August he was in fights at Moorfield, Bunker Hill, Martinsburg, and elsewhere, and ended the campaign with the battles of Opequan (19 September), Fisher's Hill (22 September), and Mount Jackson (23 Sept). In the meantime he had been brevetted through the different grades of his regular army rank until he was brevet Major-General. On 18 May 1865, he resigned. He was consul-general of the United States in the British provinces of North America from 1866 till 1869, when he became president of a large manufacturing company. He discovered a process for the manufacture of east-steel directly from the ore in one operation (1869-'70), invented the American asphalt pavement (Jan., 1879), and the Averell insulating conduits for wires and conductors (1884-'5), and also a machine for laying electric conductors underground (1885).