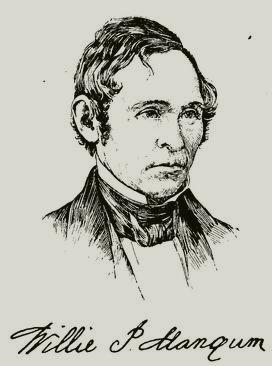 MANGUM, Willie Person, senator, born in Orange county, North Carolina, in 1792; died in Red Mountain, North Carolina, 14 September, 1861. He was graduated at the University of North Carolina in 1815, studied law, was admitted to the bar in 1817, elected to the North Carolina house of commons in 1818, and in 1819 chosen a judge of the superior court. In 1823 he was elected to congress as a Whig, and in 1825 was re-elected, serving from 1 December, 1823, till 18 March, 1826, when he resigned, and was again elected a judge of the superior court. He was elected to the United States senate, and served from 5 December, 1831, till 1886, when, under instructions from the legislature, he resigned. He declined a nomination for congress in 1837, and in the same year received the electoral vote of South Carolina for the presidency. When the Whigs again came into power in his state he was sent to the senate a second time, on the resignation of Bedford Brown, and he was re-elected at the expiration of the term, serving from 9 December, 1840, till 3 March, 1853. During the greater part of his congressional career he was one of the leaders on the Whig side. He was chosen president pro tern-pore of the senate, 31 May, 1842, on the resignation from that body of Samuel L. Southard, of New Jersey, and served during that and the succeeding congress. At the close of his last term in the senate he retired from public life. His death was hastened by nervous depression, which had been caused by the death of his only son at the first battle of Bull Run, 21 July, 1861.